Though Jim Currens is known to many as "Mr. Karst" for his hydrogeologic work at KGS, his first full-time job at the Survey in 1979 was in the Coal Section, now called Energy and Minerals. He had begun working at the Survey as an undergraduate UK geology student, when he compiled an industrial minerals bibliography with Assistant Director Preston McGrain ("Bibliography of Industrial and Metallic Minerals in Kentucky Through August 1973," Preston McGrain and James C. Currens, Special Publication 23, series 10). It was his first KGS publication. Since then, Currens has added more than 60 papers, reports, and maps on coal and groundwater in karst. Jim Currens investigates a report of a cover-collapse sinkhole in Lexington. Among Currens's awards was the 2014 Bill Barfield Award for outstanding contributions to water-resources research, from the Kentucky Water Resources Research Institute.

His master's thesis at Eastern Kentucky University also focused on coal. "I identified a marker bed that extends all the way across the Eastern Kentucky Coal Field that turned out to be really important for correlating the stratigraphy across the coal field," says Currens. His thesis eventually became the basis of a U.S. Geological Survey publication: "The Betsie Shale Member—A Datum for Exploration and Stratigraphic Analysis of the Lower Part of the Pennsylvanian in the Central Appalachian Basin," by Charles L. Rice, James C. Currens, James A. Henderson Jr., and Jack E. Nolde (USGS Bulletin 1834, 1987).

After working for a year in the engineering division of Ashland Coal (a job he admits he hated), he returned to KGS to work with Norm Hester sampling coal beds in Kentucky's coal fields and producing several publications on coal quality. In anticipation of eventually changing fields, he started taking hydrogeology courses. When funding for the coal work ran out, he was qualified to move into the Water Resources Section in 1986 to become a database manager. But setting his sights on hydrogeologic field work, Currens managed to get assigned to study a flooding problem in the karst of Jessamine County. Continuing to respond to calls from communities and individuals, he had found the work he wanted to spend more time on. "I really enjoy helping people out that are in a bind," Currens says. "When somebody has a flooding problem or a house affected by a cover-collapse sinkhole, it's really gratifying to help them as much as I can." 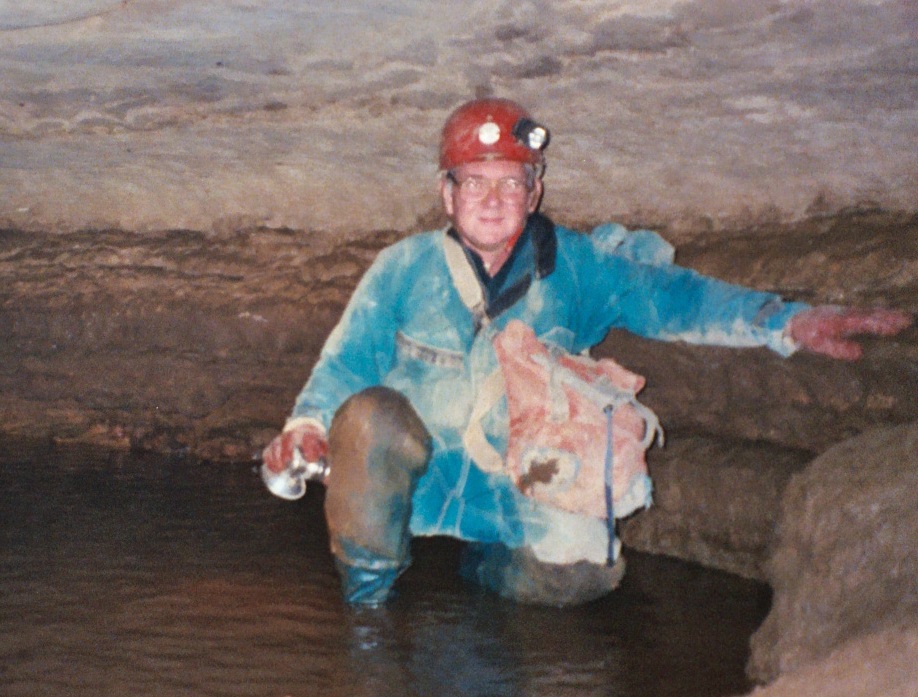 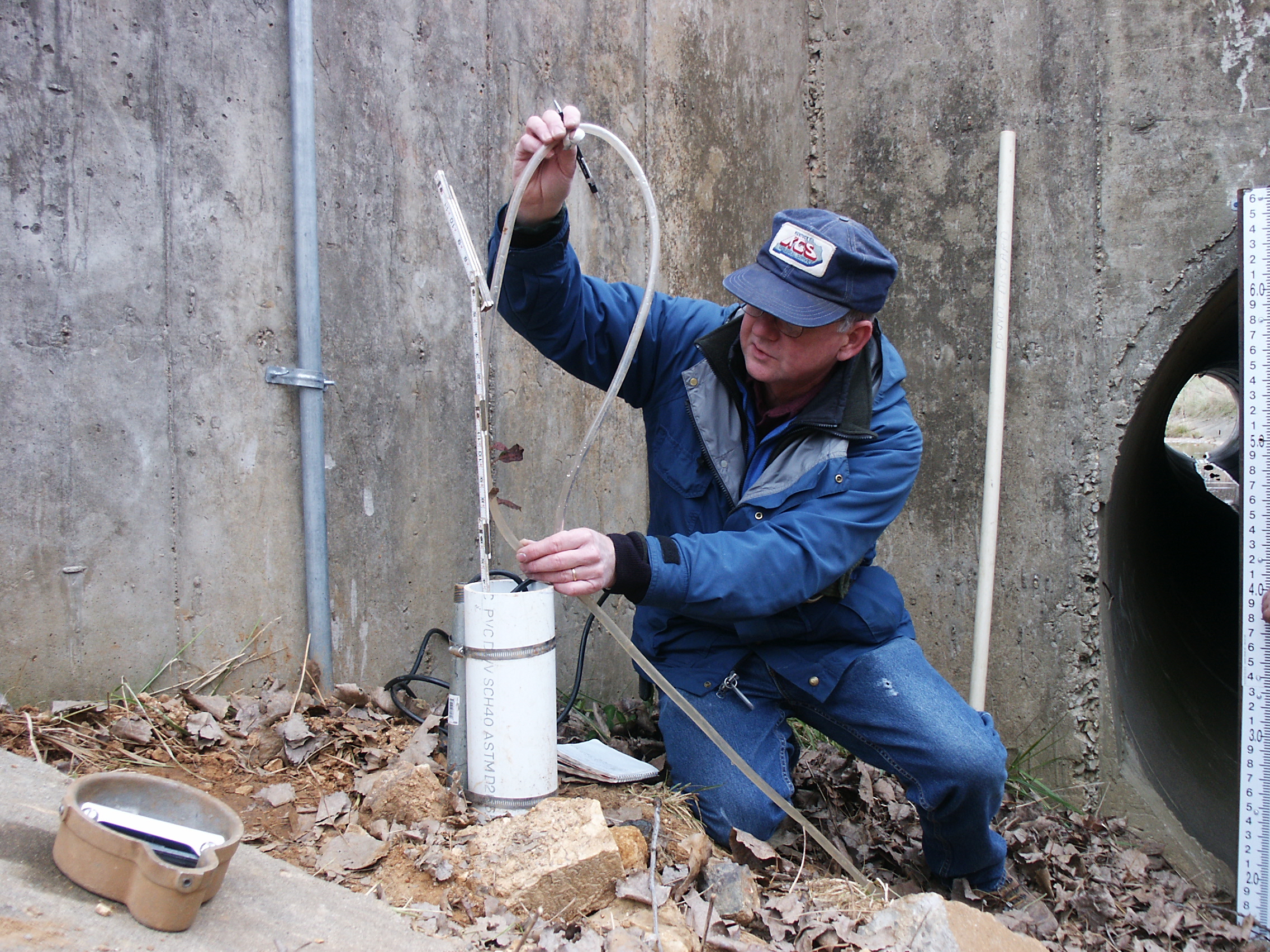 In 2004, Currens was involved in a major karst hydrology study in Radcliff.

He has responded to reports of sinkholes around the state countless times, while conducting or managing hundreds of groundwater dye traces, leading hydrogeologic projects to help communities understand karst flooding issues, and developing the Kentucky Karst Atlas.

Among the most significant results of his hydrogeologic work at KGS, he says, are 13 published karst groundwater basin maps, which have been used far more than he thought they would be. "Until I did these maps, we didn't know where we didn't have data. That's one of the most important functions of these maps. They tell us what needs to be done next." 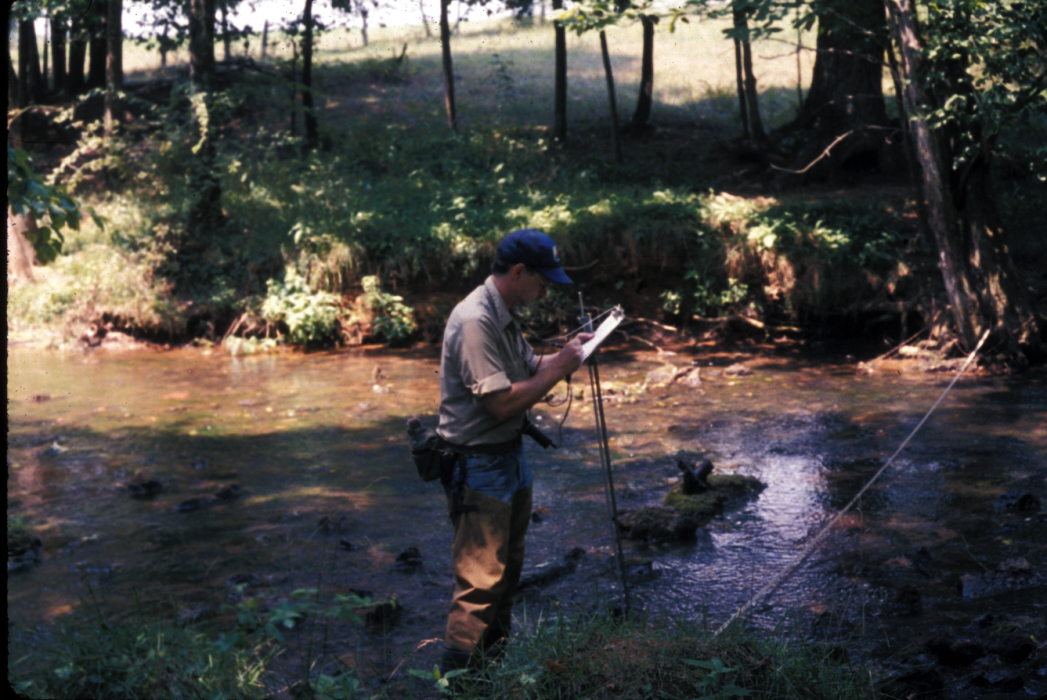 Early in his career, Currens measured a stream discharge in Logan County. Currens sets up an automatic water sampler on Cane Run Creek for the Royal Spring project.

Working in the field and gathering data, he says, can lead to new discoveries and insights. "You never know when you're going to find something you weren't expecting. I think that's the most important aspect of doing this kind of work. You make a discovery that was totally unexpected and it turns out to be really important." Currens has worked in the Water Resources Section since 1989 and will retire on June 1, after working for four state geologists.

He has been involved in making discoveries with his related activity of caving as well. He says some would discount the effort, but he considers leading the key caving trips that made the discovery of Roppel Cave, which connects with Mammoth Cave, "the greatest personal achievement of my life." Currens has helped in the incorporation of three caving nonprofits in Kentucky and a Civil War reenactment organization. 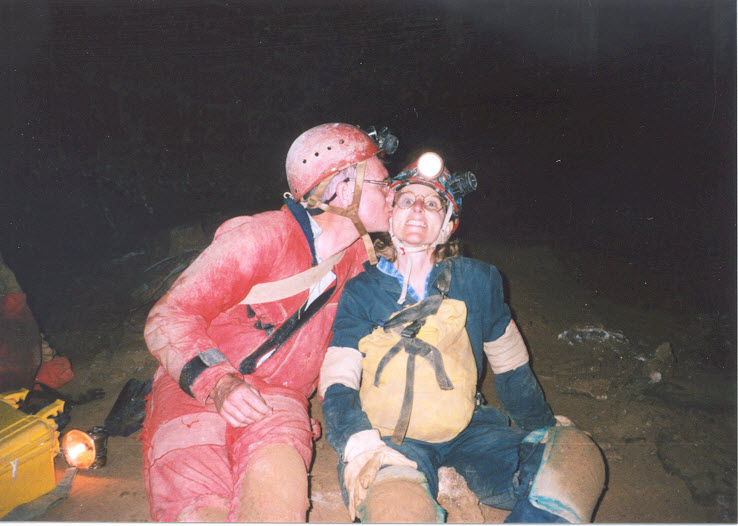 Currens with his wife, Teresa, on Yahoo Avenue in Roppel Cave. 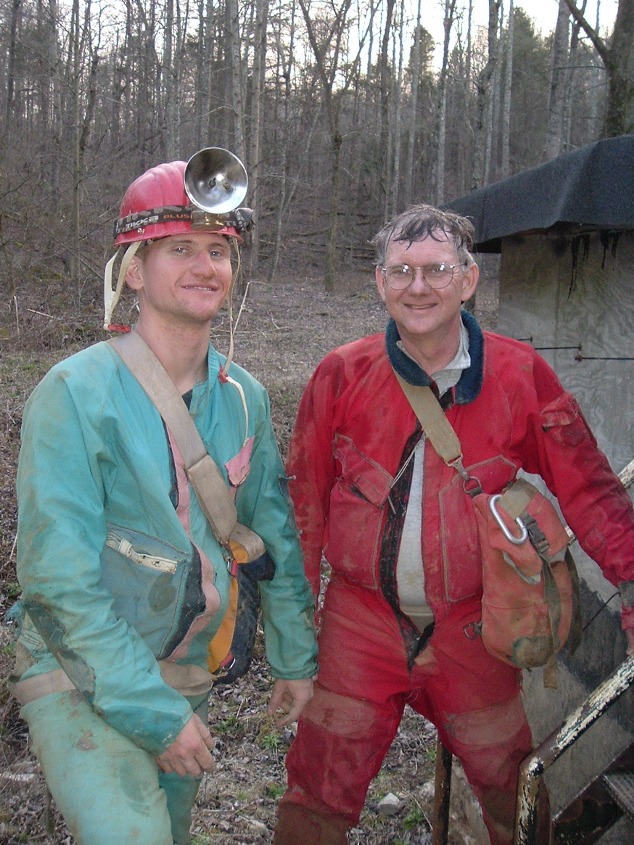 Ben Currens, a UK student and KGS student worker, with his dad just after a caving trip.

Among Currens's other accomplishments at KGS:

Even after retiring, Currens hopes to complete at least one more project: creation of a map of the Roppel Cave portion of Mammoth Cave.