LEXINGTON, Ky. (Aug. 5, 2019) — Little did Dealla Samadi know that something as simple as reading an email about an internship opportunity would transform her life so dramatically. 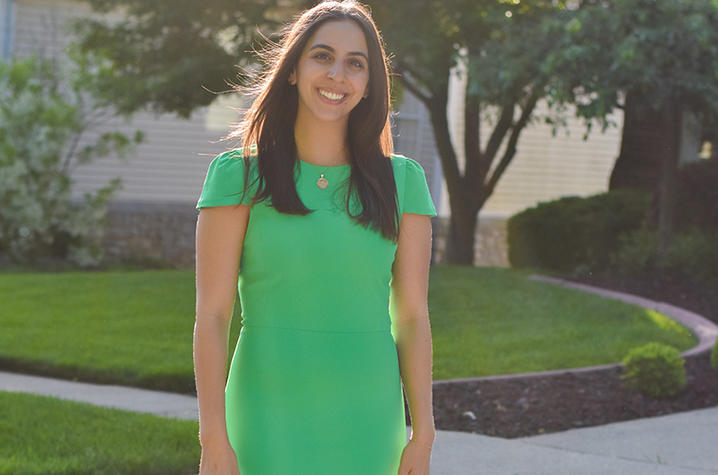 Samadi had a full schedule as a biology, neuroscience and French undergraduate student at the University of Kentucky in the fall of 2017. Still, the chance to conduct research in the humanities in UK Libraries’ Special Collections Research Center’s Learning Lab lured her to fill out an application. She never could have imagined that the internship would take her on an unexpected journey to an amazing discovery that would compel her to cross the ocean in a quest to learn more.

An internship in the Learning Lab is designed to introduce students to UK's archives, exposing them to primary sources, teaching why those sources are important to discovery, and showing them how to process the information. Samadi was tasked with researching a journal thought to be written by famous existential philosopher Jean-Paul Sartre (1905-1980) that had been carefully housed in an acid-free box on a shelf in the Margaret I. King Library's Special Collections Research Center for over 50 years.

Undergraduate Research Archivist Carol Street, who was also Samadi's mentor, said their records indicated that they had a Sartre manuscript that was purchased from a dealer in Paris in 1967 by an archivist for the UK Libraries, but little else was known.

"Unsigned and undated, there was no physical evidence that the journal was written by the hand of Sartre other than the item's accession record in the archives' database," Samadi said. "However, when I sat with the journal for the first time, as it lay on the desk in front of me inside of a tan manila folder labeled with my name, I was overcome with certitude. The blue cover page demanded my attention, its worn yet sturdy texture drew my hand towards it, to trace the fine words in the corner that read 'ITALIE/arrivee.' Italy/arrival."

Samadi spent her internship poring over the 15-page manuscript, painstakingly translating the French into English and looking for clues about the author and his writing. She was so drawn to the mystery of this text that she spent hours of her free time staring at the scrawling looking for patterns and repetition of shapes of lines and symbols that she could equate with words. Sartre used initials rather than full names and the letter S kept appearing throughout the text. If this was a genuine Sartre manuscript, she thought the S could very well stand for Simone de Beauvoir, Sartre's lover and fellow writer and activist.

"Some days gave rise to only one transcribed word and other days entire sequences of them would magically appear, as if Sartre himself was holding a magnifying glass above the paper, directing my attention to passages that gave me hints and clues,” she said. “As I read through Sartre's reflections, I slowly fell in love with Rome. I fell in love with the streets that he wandered through the night until dawn, and I fell in love with the banks that he and Simone de Beauvoir wanted to sit on for hours, just to watch the sky change.”

"The Sartre experts were very excited when they learned of the existence of this missing manuscript," Street said. "Not only is this a missing chapter, but it is the very beginning of the book and its discovery changes the way scholars perceive the book. Dealla’s dedication to her internship made this discovery possible."

And the generosity of UK’s donors made Samadi’s internship possible, said Daniel King, UK Libraries director of philanthropy. Gifts to the Special Collections Development Fund preserve and protect historic documents and digitize them so they will be accessible to students, faculty, staff and researchers for generations to come. The fund also supports the work of the Louis N. Nunn Center for Oral History and the Wendell H. Ford Public Policy Research Center.

“Opportunities like Dealla’s, to uncover the secrets of our Special Collections Research Center archives, would not be possible without support from our donors who value preserving the history of the Commonwealth of Kentucky,” King said. “We are grateful for all of our donors who provide our students, faculty and staff the resources, technology, learning opportunities and collaborative spaces that foster learning and discovery.”

As the transcription came closer to completion, Samadi did not feel she was at a personal stopping point. She felt compelled to retrace Sartre's steps in Rome. With the help of a summer research grant from UK's Undergraduate Research Office, Samadi boarded a plane in May 2018.

"The most beautiful part is I wasn't alone," she said. "I had my transcription of his journal and a pen of my own. I became the object that bends time, connecting past, present, and future with every step and breath I took. I was a time traveler, not confined to the year 2018 and the ideas of only an undergraduate. I had all of this expansive history behind me and in every moment, I was coalescing a philosopher's words with my thoughts and my movements."

Samadi knows she didn't get this far in her research without the encouragement and support of many people and communities at UK.

"I've had so much support from the French department, UK Libraries, the Chellgren Center, the Undergraduate Research Center, the Lewis Honors College, and the Graduate School,” Samadi said. “These people and communities at UK come together to support students, and I'm grateful for the love these communities have shown me.”

Samadi just returned from Oldenburg, Germany, where she and six other Library Learning Lab interns, escorted by Street, went to present their research at the second World Conference of Undergraduate Research.

This summer, Samadi will begin her studies at the UK College of Medicine, where she plans to become a geriatrician. She believes her experience at the Learning Lab relates to being a doctor, because one must have empathy to walk patients through the aging process.

"You have to step outside your own shoes and see the world from different perspectives just as I did retracing Sartre's steps and immersing myself in his world, looking at Rome through his eyes, at the time he authored the journal," she said.

Samadi's research project doesn't simply end with her presentation at the World CUR. The result of her internship will impact other scholars in future. She is creating a digital humanities project which will allow others to discover Sartre's Roman journal through the lens of her experience in Rome.

“My relationship with Sartre and Rome shook me violently, melting away the amorphous confines of thought so that I would perceive beautifully and freely the world around me,” Samadi said. “Maybe one day, my adventure serves the same role to somebody else that Sartre's did to me."

In the end, with the help of the Sartre experts Jean Bourgault and Gilles Phillippe from the ITEM, Samadi published the missing chapter, as well as a brief introduction in French. They discovered that the Sartre journal is the opening chapter of a book Sartre wrote in 1951 titled "La Reine Albemarle," which was published posthumously without the UK manuscript.

"Through this experience I have become familiar with humanity's nuances, I have learned about the human capacity to transcend time, and I have engaged with my own humanity. I find this to be the most genuine and fulfilling act of living," Samadi said.