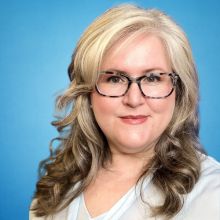 Donna has worked in Higher Education for 18 years split between Eastern Kentucky University (4 years) and the University of Kentucky (14 years). During which time she has worked in the areas of Residence Life, Student Conduct, Off-Campus Student Services, and now Student Career Services. Donna received a Bachelor of Arts in Art with a minor in Education from 1994 to 1999 and a Bachelor of Individualized Studies in International Studies with a minor in Political Science from 2001-2004 at Eastern Kentucky University. Donna received a Master of Arts in Adult & Higher Education from Morehead State University from 2015-2016.

Prior job that shaped her: Throughout her career, Donna has focused her energies on serving students and advocating for their best interests. Prior areas of her career that have influenced her development have been her work with student organizations and student leaders. Donna has held several student organization advising positions over the last 18 years that has included EKU and UK residence hall governments, UK Residence Hall Association (RSA), UK National Residence Hall Honorary (NRHH), Kentucky Association of Residence Halls (KARH), South Atlantic Affiliate or College-University Residence Halls (SAACURH), and UK Off-Campus Student Association (OCSA). In addition to student organization advising, she has had the great pleasure of working with many student leaders through the years that included Sigma Kappa Sorority, Student Government Association (SGA), Fraternity & Sorority Affairs, Center for Community Outreach (CCO), Student Activities Board (SAB), and more.

What she enjoys doing outside of work: Outside of work, Donna splits her time between her family and friends. She loves cooking, baking, reading, crocheting, gardening, and catching up on movies and tv shows.

A goal in life: Donna would like to start academic work towards a Doctorate in Education.

Fun fact:  Donna spent two summers studying abroad in London, England, and was a Resident Assistant for one summer at King’s College through the Cooperative Center for Study Abroad. Donna loves to learn about other cultures and would one day love to travel more.

Handshake is a one-stop shop for students, alumni, and employers.

UK Students make a virtual or in-person appointment with a Career Advisor or Major Exploratory Associate by logging into Handshake via the button above.