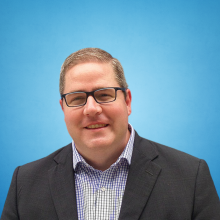 Ray has more than 12 years of experience in career services.  Prior to his arrival at UK, Ray directed the career center at Georgetown College from 2011 to 2015 and worked in career services at the Indiana University School of Public and Environmental Affairs from 2004 to 2011, while serving as office director from 2006 to 2011.  Ray earned a master’s degree in Counseling at Indiana University and for the past 4 years, Ray has been a part-time graduate student in the UK College of Education, where he is pursuing a Ph.D. in Higher Education with an emphasis in Student Affairs.

Prior job that shaped him:  Ray’s introduction to the career services profession came via a graduate assistantship with the Indiana University Career Development Center.  This was a transformative experience that afforded Ray the opportunity to work alongside a team of seasoned career development professionals and gain lifelong professional mentors.  As a new college graduate, Ray held jobs as an elementary school teacher, a US Census Bureau statistician, and as a processing clerk for a regional label manufacturer.  After completing a semester of continuing non-degree coursework at a local university, Ray decided to pursue a master’s degree in counseling.  In hindsight, the early indecision and career struggles that Ray experienced helped him gain a greater appreciation for the science and methodology of career development.

How he would describe himself:  In short, a “committed optimist”.  One of Ray’s favorite expressions is a quote from Henry David Thoreau, “Only that day dawns to which we are awake.”  He likes this assertion because he’s always believed that what we choose to do with our lives is important, but so is the attitude with which we approach the challenges and opportunities in our lives.

A goal in life:  To always strive to have a positive impact, and to see the Chicago Cubs finally win another World Series!

Fun Fact:  During his first year out of college, Ray decided to accept a seasonal employment position at Yellowstone National Park.  He was stationed in Mammoth Hot Springs, near Gardiner, Montana.  When he wasn’t working as a groundskeeper and cleaning tourist cabins, Ray spent time with friends observing bison, elk, wolves, and grizzly bears (usually from a safe distance) and explored the trails and backcountry of one of the most beautiful places in the world.  Hikes in Lamar Valley in the park’s Roosevelt Country were a high point of Ray’s summer.

Handshake is a one-stop shop for students, alumni, and employers.

UK Students make a virtual or in-person appointment with a Career Advisor or Major Exploratory Associate by logging into Handshake via the button above.