Amaranth is a versatile warm-season, broadleaf plant that can be grown as a grain, ornamental, leafy vegetable, or forage crop. In the U.S. it is grown almost exclusively for its grain, which is produced on large, brightly colored seed heads. Most grain amaranth grown in the States is Amaranthus hypochondriacus; however, A. cruentus is grown to a lesser extent.

The main wholesale amaranth buyers in the United States at the date of this publication are: Arrowhead Mills in Texas, Health Valley in California, and Nu-World Amaranth in Chicago. Transportation costs to these markets would be excessive for production in Kentucky. Because the largest consumer of amaranth is the health food industry, growers may be able to tap into that local market, including health food stores and restaurants. Since amaranth is gluten-free, it can be used as a wheat-substitute for those with a gluten allergy. Some growers in other states market bags of grain or ground flour directly to consumers and local bakeries needing a gluten-free product. One of the major drawbacks to amaranth production is the small market. However, amaranth is increasing in favor with people wanting gluten-free products. Prospective growers should consider amaranth production only after they have identified and locked in a market, and preferably have a written contract in hand. Growers with storage facilities could have a marketing edge. Additionally, organic and transitional organic growers may be in a better position for marketing their grain. 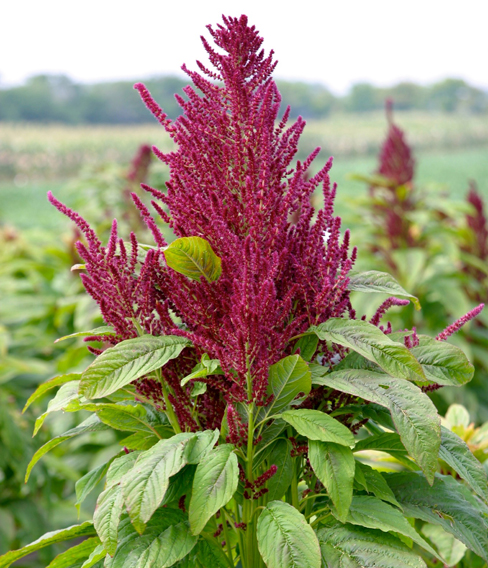 Amaranth can grow to a height of 2 to 8 feet, depending on the species and cultivar. Varieties may differ in flower, leaf, and stem coloration, with maroon and crimson as the most common colors. There are a limited number of varieties available, most notably some early Rodale lines (such as K432) and later a University of Nebraska Experiment Station release (Plainsman). Plainsman is available through certified seed channels. Amaranth prefers fertile, well-drained soils and will not tolerate poorly drained soils. Since it is initially a poor competitor with weeds due to its slow growth, amaranth should not be planted in fields with difficult-to-manage noxious weeds. Amaranth works well in a rotation with corn and soybeans. However, sites with possible triazine carry-over should be avoided due to the potential for injury. Amaranth is related to pigweeds, waterhemp, and Palmer amaranth, so herbicides that control those weeds may injure amaranth.