Celery (Apium graveolens) is an herb and vegetable member of the parsley family. It is a cool-season crop that is a biennial, but is often grown as an annual for fresh market consumption. It does best when temperatures are relatively cool, particularly at night. Celery is a versatile ingredient for cooking, used both fresh and frozen. The stalk is often served raw or cooked in vegetable dishes. Celery leaves are used much like an herb, similar to parsley, in flavoring soups, stews, salads and other dishes. Celeriac (Apium rapaceum) is also known as celery root, and is grown for its smooth celery flavor and long storage capacity. 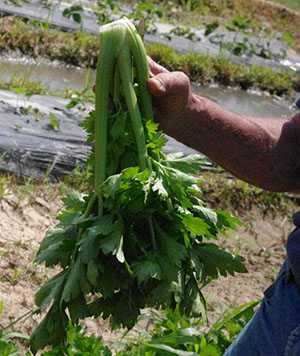 Fresh market celery production is concentrated in California and Michigan. A small portion of celery is harvested for processing use in prepared foods such as soups and juices. The 2017 Census of Agriculture reported 1,603 U.S. farms harvested 34,717 acres of celery, with 30,385 acres harvested for fresh market sales1. The 2017 Census reported that 17 Kentucky farms harvested celery2. Celeriac was not reported in the 2012 or 2017 Census information. Per capita fresh celery use declined somewhat, from 6 pounds in 2012 to 5 pounds in 2016, according to the Economic Research Service. Celery and celeriac may be interesting crops for direct marketing in Kentucky, such as farmers markets sales and sales to restaurants. 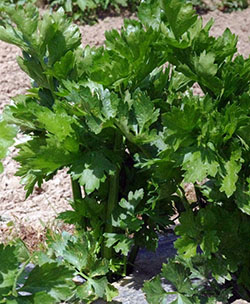 Celery generally takes 85-120 days to harvest after transplanting, while celeriac requires a longer growing season than most vegetables. Both also require a consistent amount of water throughout the entire growing season and prefer cool temperatures. Celery is a more difficult crop to grow and when drought stressed, it becomes tough, stringy and stronger in flavor.

Conga, Merengo, Samba and Tango are varieties that should do well in Kentucky. Samba and Merengo are resistant to Fusarium and Tango is tolerant to this soilborne disease. Tango is considered to be sweeter and more tender than the other varieties listed here and is thus an excellent prospect for direct sales. Mars and Brilliant are two very good celeriac varieties.

Celery and celeriac both require fertile, well-drained soils with a pH range of 6.0 to 7.0. Irrigation is very important throughout the growing season. Sow seeds indoors in March, about 10 - 12 weeks before transplanting outdoors. Keep soil temperature warm and germination should occur within three weeks. Transplant outdoors in late May to mid-June after last frost has passed.