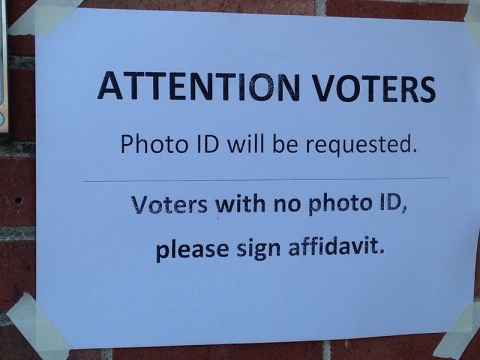 If you are going to vote this cycle it is more likely than not you will need to present your ID to cast a ballot. 32 states have laws in place that require you to do so and up until this past summer that total was to include one more, the important swing state of North Carolina. The 4th Circuit Court of Appeals’ ruling in North Carolina NAACP v. McCrory overturned North Carolina’s controversial voter ID law, HB 589, and as a result, citizens of the Tar Heel state do not need to present an ID to vote in person on election day.

The North Carolina General Assembly passed HB 589 shortly after the Supreme Court’s ruling in Shelby County v. Holder, which made it significantly easier for a state like North Carolina to pass a voter ID law. At the heart of Shelby County was Section 5 of the Voting Rights Act of 1965. Section 5 required that states or localities with a history of voter discrimination, like some counties in North Carolina, receive approval from the federal government before making changing to their election laws. This approval is called “preclearance.” In a 5-4 decision written by Chief Justice Roberts, the Court overturned the VRA’s coverage formula to determine which states and localities were required to seek preclearance, meaning that states like North Carolina could change their election laws without preclearance, which they very quickly did. The day after the Shelby County decision was handed down, the Republican legislative leader announced an intention to pass a new “omnibus” election law bill, which resulted in HB 589. Proponents of the bill claimed the new law was needed to address voter fraud concerns, while the bill’s opponents pointed out a 2013 report by the North Carolina Board of Elections which revealed that out of 40 million votes cast between 2000 and 2012 there were only 2 cases of in-person voter fraud that were referred to the District Attorney.

HB 589 made numerous changes to North Carolina election law. Citizens were required to present any of 8 acceptable forms of ID: North Carolina driver’s license; special ID for non-operators; US passport; US military ID card; federal tribal enrollment card; NC tribal enrollment card; or a driver’s license from another state if the voter’s registration was within 90 days of the election. Early voting was reduced from 17 to 10 days. Out-of-precinct voting, which allowed voters who show up at the wrong precinct to cast a provisional vote as long as they are in the correct county, was eliminated. Preregistration was also done away with, which allowed 16 and 17 year olds to register to vote even if they would not be eligible to vote in the next election.

On the day the bill was signed into law the North Carolina NAACP sued the state over the ID requirement. Federal District Court Judge Thomas Schroeder of the Middle District of North Carolina upheld the law. Judge Schroeder found the justifications for the law, such as the desire to protect against voter fraud, to be “not unreasonable” and “plausible.” However, the 4th Circuit Court of Appeals overturned this ruling. Judge Diana Motz, writing for the court, stated that the law was “the most restrictive voting law North Carolina has seen since the era of Jim Crow.” The Court found that the North Carolina General Assembly acted with discriminatory intent and that HB 589 violated the 14th and 15th Amendments, which prohibit racial discrimination in the regulation of elections.

Before overturning the law, the court assessed the non-racial factors that could have contributed to the legislation’s passage. Judge Motz wrote, “In enacting the photo ID requirement, the General Assembly stated that it sought to combat voter fraud and promote public confidence in the electoral system.” The court found that, contrary to the stated goal, the legislature would not have enacted the law if it did not disproportionally affect African American voters. The law only addressed in-person voting and North Carolina failed to identify a single person accused of in-person voter fraud.

Judge Motz wrote that the “problem” the majority party in the state legislature was trying to deal with was “emerging support for the minority party.” As a result of the General Assembly’s racial motivation in passing the law, HB 589 was ruled to be in violation of constitutional and statutory prohibitions on intentional discrimination. The 4th Circuit Court of Appeals found that the appropriate remedy was to strike down each of those provisions.

However, the legal challenge did not end with the 4th Circuit’s ruling. In August, North Carolina filed an emergency appeal asking the Supreme Court to allow it to implement several provisions of HB 589 for the November 2016 election: the voter ID requirement, reduction in early voting days, and preregistration. Later that month, North Carolina’s appeal fell one vote short of the required five Justices to halt the lower court’s ruling. As a result, North Carolina citizens will not have to present an ID to exercise their right to vote.