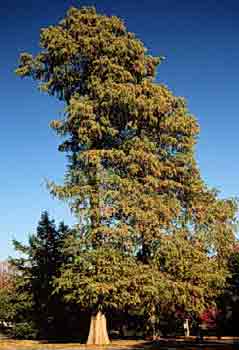 Bald cypress grows naturally in swampy areas that are flooded several months out of the year. It occurs only in southwestern Kentucky along the Mississippi, Ohio and Green rivers. When grown in standing water, unique structures called knees emerge from the root system that allow adaptation to wet sites. The Kentucky champion tree is in Fulton County and is 130 feet tall.

Introduction: This tree's vibrant, soft-looking, bright green needles are stunning against its shaggy, cinnamon-colored bark. In autumn the fern-like foliage turns bright copper or russet and drops from the tree to form a carpet of soft needles. The fibrous cypress bark that peels off in long strips is highlighted in winter when the tree is without foliage. 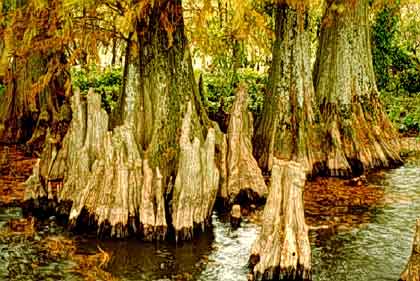 Culture: This conifer requires full sun and acidic soil to thrive. It can tolerate both wet and dry conditions, but becomes chlorotic in alkaline soil. Characteristic "knees" are roots that come above the surface of the soil and help anchor the tree. Knees form only in wet habitats. Knees add a unique characteristic to the landscape but can become a mowing hazard. Bald cypress resists damage from high winds and is considered tough and adaptable. 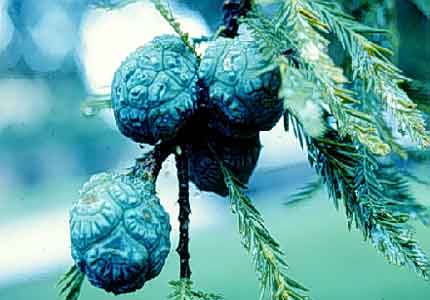 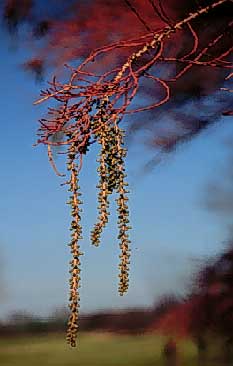 Selected cultivars:
Additional information:
Bald cypress' native range includes the southeastern U.S., where it is the dominant tree in swampy environments. It is one of the conifer species that loses its leaves in the fall. The natural range of the bald cypress is limited by two factors: the need for constant moisture until a sapling root reaches the water table and the need for seasonal flooding to eliminate invading hardwoods.

Bald cypress can grow in standing water. It is equally at home under normal garden conditions. The wood of bald cypress is highly valued for its decay resistance and is sought out for construction of boats, docks and bridges.

It is the source of the popular cypress mulch used by gardeners and landscapers. The number of mature bald cypress trees is declining because of the slow rate of reproduction compared to the rate of harvest and because of the draining of its swampland habitats.

Around water, bald cypress produces characteristic "knees" that grow up from the root system. It was speculated that the knees aid in oxygen movement to the submerged roots. This is probably not true and the knees may simply help anchor the tree in wet soils. Knees were used by Native Americans as beehives. The term "knee" probably refers to the use of curved knees to support the hulls of wooden ships.

T. distichum var. nutans is called the pendant pond cypress because of its nodding (= nutans) branchlets. Taxonomists have recently shifted this plant to being a botanical variety. It was previously its own species - T. ascendens - and is still sold as such. The pond cypress is nearly identical to the bald cypress except it has thicker bark, produces fewer knees and has more thread-like foliage that is pressed tightly against the twig.

The genus name Taxodium is derived from the Latin name for the yew tree, Taxus, combined with the Greek "eidos," meaning similar to. The specific epithet, distichum, means two-ranked, referring to the leaf position on the twig. Bald cypress makes a distinctive bonsai.

The national champion bald cypress (83 feet) is in Louisiana.

Bald cypress was introduced into the landscape in 1640.