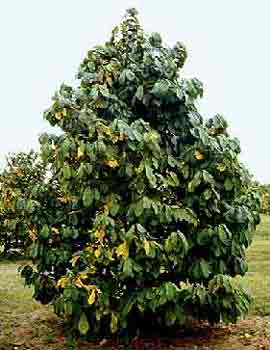 Pawpaw grows in thickets in the forest understory and along woodland edges. It is the native plant that produces the largest berry in North America. The Kentucky champion tree is in Letcher County and is over 30 feet tall.

Introduction: Pawpaw, found from New York to Florida and west to Texas, has a semi-tropical appearance and is known for its fruit, the largest berry (up to 5 inches long) produced by any tree native to the United States. The fruit is nutritious and has been used in cancer therapy. Its twigs and bark contain a natural insecticide.
Culture: Pawpaw prefers fertile, moist soil that is slightly acidic, and will sometimes tolerate wet soil. It can be grown in sun or shade, exhibiting dense growth in sun and open growth in shade. Pawpaw grows quickly if mulched and watered during droughts; it is drought-sensitive when grown in sun. Seedlings should be planted in shade for the first year as they are sensitive to ultraviolet light. Pawpaw is pest-free and hardy in zones 5 through 8. It can be trained to grow with multiple trunks and its limbs are break-resistant. Some pruning is needed to create clearance because of drooping branches. Mowing or pruning the suckers that emerge from the root system encourages sprouting, so they should be hand-pulled while still small.
Botanical Information 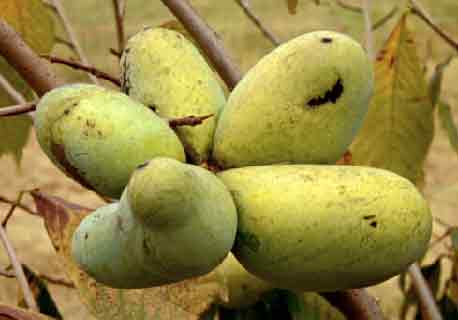 There are at least 45 cultivars of pawpaw selected for their fruit characteristics. The national germplasm repository for pawpaw is at Kentucky State University in Frankfort, KY. Selected cultivars include: 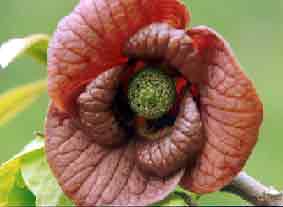 Additional information:
There has been great demand for pawpaw recently, not only because of its appealing ornamental characteristics and tastyfruit, but also because of its potential as a source of organic insecticide and for use in cancer therapy. An insecticide can be made from the tree's ground-up bark and twigs. Extract from pawpaw can overcome the ability of some cancer cells to reject chemotherapy.

On dormant stems, pointed buds are vegetative while flower buds are round and fuzzy. Cross-pollination is needed to get good fruit set in pawpaw. Pawpaw fruit develops in clusters. Fruit with orange flesh is considered the tastiest. The fruit attracts wildlife (especially raccoons, opossums, gray squirrels and birds). It also attracts the beautiful zebra swallowtail butterfly, giving added incentive for wildlife lovers to obtain the tree. It is an excellent source of vitamins A and C, and is high in unsaturated fats, proteins and carbohydrates. Pawpaws contain more potassium, phosphorus, magnesium and sulfur than apples, grapes or peaches. 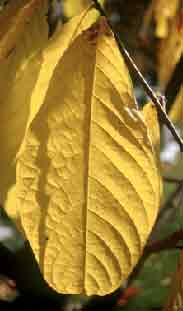 The first reference to pawpaw came in writings of Hernando DeSoto's expedition to the Mississippi Valley in 1541. The fruit, a favorite food of American Indians, was used to feed DeSoto's conquistadors. Early North American settlers used the fruit to make jelly, and the tree's inner bark to string fish. Indians in Louisiana used the inner bark to weave a fiber cloth.

Although pawpaw is in great demand, it does have a disadvantage. Its fruit and foliage produce a great deal of litter. Planting only one tree can help alleviate the problem, as lack of cross-pollination leads to production of less fruit. Because they are broader at the tip than at the base the leaves droop, giving pawpaw a "sleepy" or tropical appearance.

The genus Asimina includes the only temperate members of this family. The tree, which is hard to transplant because of its wide root system, should be balled-and-burlapped and moved when it is less than 6 feet tall.

Send mail to cgcass0@uky.edu with questions about this site. This site was last updated on January 26, 2023. Copyright 2023, University of Kentucky, College of Agriculture, Food and Environment. An Equal Opportunity University. Site design : Academic Web Pages