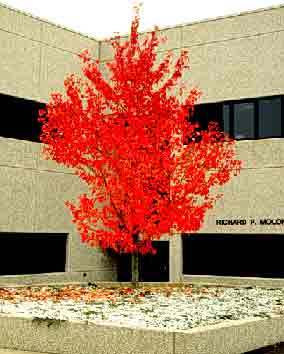 Red maple is one of the most recognized trees with some part of the plant red all season long. It occurs throughout Kentucky on both wet and dry sites, but prefers acid soils. The Kentucky co-champion trees are in Balllard and Henderson Counties and are over 80 feet tall.

Introduction: Red maple is one of the most popular shade trees in the eastern U.S. It is also a major component of the native habitat throughout its region. From red flowers to its beautiful bark, red maple offers a variety of interests for the landscape in all seasons of the year.
Culture: This is a beautiful shade tree that has strong wood, but is also fast-growing. It is used as a lawn or park tree. Red maple prefers slightly acidic, moist soils. It shows chlorosis in alkaline soils due to manganese deficiency. It tolerates ozone and sulfur dioxide to some extent. This tree should be transplanted bare root or balled-and-burlapped when dormant. Young trees suffering from transplant stress are particularly vulnerable to a flat-headed borer. Leafhoppers can cause leaf distortion. Verticillium wilt and sun scald may also be problems with red maple. Red maple has a shallow root system that competes vigorously with surrounding plants for available water. Cultivars are recommended to ensure good fall color. This tree should not beplanted in pastures with horses or cattle because its leaves can be toxic in the fall. 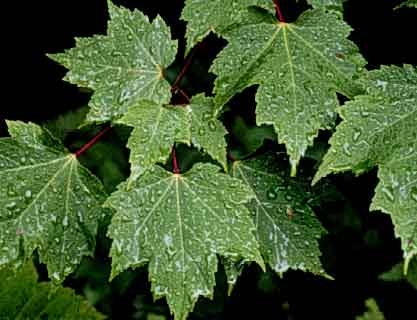 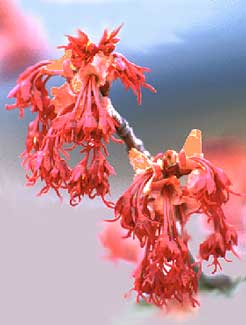 There are numerous cultivars of red maple, some of which are selections of A. x freemanii (A. rubrum x A. saccharinum). The more common ones include: ‘Armstrong' - An upright form of red maple that is a selection of A. x freemanii. It grows faster than the other upright maples. It does not have as strong a fall color as other red maple cultivars. ‘Columnare' - Sometimes called ‘Bowhall,' this is a strong upright-growing form of red maple. It is slower-growing and makes a good landscape tree for limited space or a street tree. October Glory ® - Second only to Red Sunset® in popularity as a shade tree, this cultivar develops dependable, late-season orange to red color. It colors later in the season than other red maple cultivars, at about the same time as Bradford pear. Red Sunset ® - A very beautiful and popular shade tree. This cultivar has dependable red color in Kentucky. Red Sunset® is the trademark name; 'Franksred' is the cultivar name.

Additional information: Red maple wood is called "soft maple" in the lumber trade but should not be confused with the weaker-wooded silver or water maple (Acer saccharinum). Its wood is heavy and close-grained. It has been used for furniture, cabinets and veneer. Red maple can also be tapped for sap, but is not as productive as sugar maple. 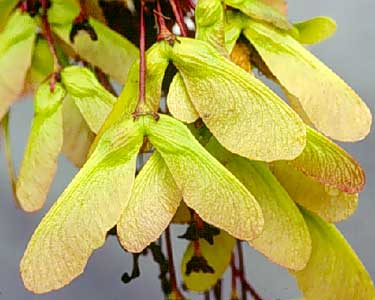 Pioneers used red maple bark to make ink and cinnamon-brown and black dyes. A 141-foot-tall national champion can be found in Tennessee in Great Smoky Mountains National Park. Red maple was introduced into the landscape in 1860.
Red maple has attractive ornamental features in every season. Early in spring, before leafing out, clusters of tiny red flowers with long, showy stamens cover the branches. Emerging leaves and winged fruit (called samaras) are reddish, and the petioles (leafstalks) are red. Fall foliage is striking and the bark, shaggy with age, is a nice winter feature. Red maple is one of the most popular shade trees grown in the eastern United States because of its fast growth and brilliant fall color. Gardeners should take into consideration the extensive shallow root system that makes growing herbaceous plants near large red maples very difficult.
Red maple is one of the most abundant species in temperate forests of eastern North America and has a wide north to south distribution. Because of this wide natural range, it is extremely variable in form. The leaves of southern forms tend to have only three lobes compared to five lobes on northern forms. Southern forms also tend to have multiple leaders and less upright habit. Fall leaf color is also variable.
Red maples as a group do not grow well as grafted trees. Poor grafts can fail years after they are planted. Many cultivar maples are propagated by cuttings or tissue culture. Red maple's species name, rubrum, refers to the clusters of small red flowers produced in early spring.