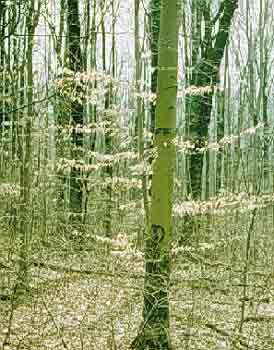 Introduction: American beech is a distinctive and elegant forest tree in Kentucky and throughout eastern North America. In early spring new leaves emerge from buds as feathery tassels. Handsome foliage develops a golden bronze color in the fall. American beech's graceful, spreading form is superior to other beeches and is attractive throughout the year. Winter, however, emphasizes this tree's other notable attributes - its long, thin, pointed, brown leaf buds and its smooth, thin, light gray, "wrinkled" bark that resembles an elephant's hide. American beech bark is nearly white and is much paler than European beech. Like oak, beech often holds on to its bottom leaves throughout winter.
Culture: This tree should be reserved for large areas or naturalized settings. It may be used as a specimen or allowed to sucker and used as a hedge. American beech prefers moist, well-drained soil with a
pH of 5 to 6.5. It prefers full sun but will tolerate shade. It will not tolerate wet or compacted soils. This tree has a shallow root system that makes growing grass under it difficult. Beech is prone to decay if wood is damaged andimproper pruning will decrease its life span. It should be pruned in summer or early fall. American beech has no serious insect or disease problems, but nectria canker and beech scale are potential problems. 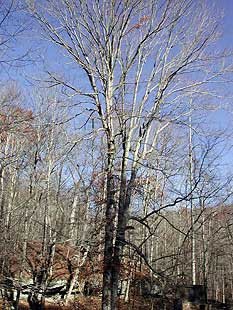 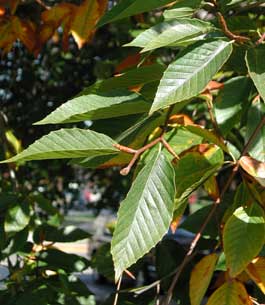 Additional information:
This beautiful forest tree grows best on the alluvial bottom lands of the Ohio and Mississippi River valleys. Beech is often seen in groves because of its propensity for reproducing itself asexually by root suckers. Most beech seeds are eaten when they mature by one of a number of wildlife species that rely on them as a food source. Passenger pigeons, before their extinction, were among those species. The pigeons were known to converge upon beech groves in such large numbers that their weight would frequently break large limbs.

Huge forests of American beech were thriving in Ohio, Kentucky, Indiana and central Michigan when colonists arrived. The beech tree's exacting requirements for growth made it an indicator of good farm land and as colonists began clearing land, the beech disappeared.

American beech wood was used as a source of fuel for their large, open fireplaces. It is now used to make household items such as wooden kitchen utensils and clothespins. Pioneers used beech leaves to stuff mattresses. Beech ashes were used to make soap. 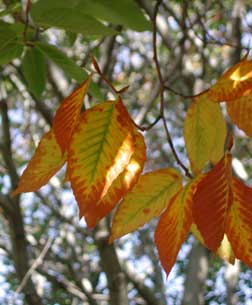 Beech has paper-smooth bark and, unfortunately, many people are compelled to carve into it. These carvings remain on the tree indefinitely. In 1916, a 365-year-old, 70-foot tall American beech in Washington County, Tennessee finally died. The scars of an inscription ("D. Boon Cilled A Bar On Tree In Year 1760"), which had been legible some 35 years before, remained on its trunk. Daniel Boone could read and write, and scholars have dismissed the inscription as the work of someone else. Still, the longevity of American beech bark and its irresistible resemblance to paper cannot be dismissed.

The national champion American beech (115 feet) is in Maryland. American beech is more difficult to propagate and produce in the nursery than European beech so it is not often sold in commercial nurseries.

Send mail to cgcass0@uky.edu with questions about this site. This site was last updated on October 6, 2021. Copyright 2021, University of Kentucky, College of Agriculture, Food and Environment. An Equal Opportunity University. Site design : Academic Web Pages