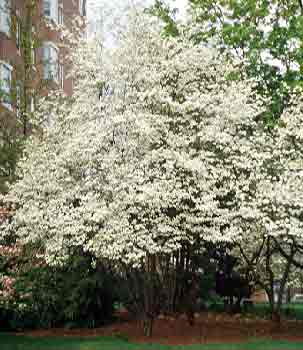 Flowering dogwood is recognized by most people for its spring floral display that can be white or pink. The showy part is actually a leaf-like bract under the tiny flowers. It is a common understory tree in wooded areas throughout the state. The Kentucky champion tree is in Warren County and is about 35 feet tall.

Introduction: Flowering dogwood is a beautiful native tree with four-season appeal. It has lovely flowers in spring, attractive foliage in summer and fall, colorful fruit in fall and an interesting growth habit that provides winter interest. Unfortunately, this tree is susceptible to a number of insect and disease problems.
Culture: Flowering dogwood prefers an acidic, well-drained soil that contains a significant amount of organic matter. It can be planted in full sun, but performs best in partial shade. The tree should be mulched to keep the soil moist and cool. It does not tolerate poorly drained soils, drought or pollution. It is hardy in Zones 5 to 9. Flowering dogwood is susceptible to borers, petal and leaf spots, and anthracnose. The latter, caused by Discula fungus, has weakened or killed large numbers of dogwoods in the eastern U.S. Powdery mildew is also a problem. 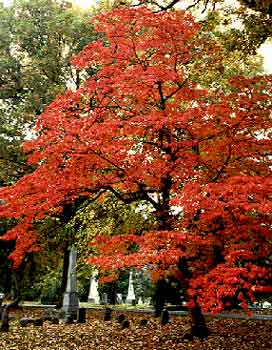 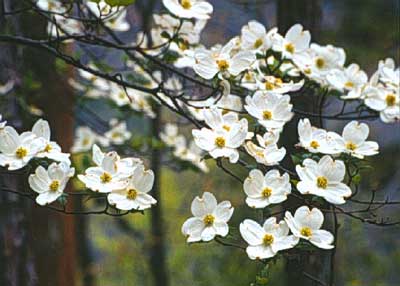 There are nearly 100 cultivars of flowering dogwood. Selected cultivars by category include:

Additional information:
The showy part of the dogwood flower is not the flower at all but the bracts! The true flower is greenish yellow and insignificant. The bracts are white and about 2 inches long, and are effective for 10 days to two weeks in April or early May. Flower buds are flat and biscuit-shaped.

Borers are a big threat to flowering dogwood, especially when its trunk is damaged by lawn mowers. It is best to locate dogwood in a bed to Cornus florida protect it from lawn mower damage.

Symptoms of anthracnose include large tan blotches or purple-rimmed leaf spots. Infected leaves tend to remain on the tree after they normally would have fallen. Trees often die within two or three years after onset of the disease.

The wood of dogwood has a high resistance to sudden shock, making it a popular choice for making golf club heads and chisel handles. It is also used for mallet heads and wedges, as it can be hammered on the ends without splitting and mushrooming out. It was once used to make hay forks, hubs of small wheels, rake teeth and machinery bearings because it wears smoother as it is used. Ninety percent of dogwood cut since the late 19th century has been used to make shuttles for the textile industry. With a mechanical loom, the shuttle is hurled at top speed, and a wood has to be used that wears smoother and will not crack under the strain. Dogwood is ideal.

The inner bark of the flowering dogwood root contains the alkaloid cornin. Native Americans used it as a treatment for malaria. They also used the onset of flowering to time the planting of their crops.Pioneers would steep dogwood bark in whiskey, then drink this to treat "the shakes." Some native Americans used dogwood bark to derive a scarlet dye, which they used to color bald eagle feathers and porcupine quills. Dogwood tea, made from the tree's bark, was used as a substitute for quinine during the Civil War. Tea made from dogwood bark was used to induce sweating to break a fever.

In modern times, overuse of flowering dogwood as a cut flower has threatened native stands of the tree. In the Washington, D.C. area, the Wild Flower Preservation Society placed posters on city streetcars, urging people not to cut or buy dogwood sprays. Sales dropped to such an extent that many merchants stopped marketing it.

Legend has it that dogwood was once a tall tree, but that changed when it was chosen to make the cross where Jesus Christ was crucified. The legend says the tree was ashamed, and asked Christ to forgive it. Christ commanded that from that moment on, the dogwood would be slender and twisted so that it could no longer be used for a cross. The tree was designated to bear flowers that were cross-shaped, with a crown of thorns in the middle, and nail prints stained with red at the outer edge of each petal. Of course, flowering dogwood is not native to the area where Christ was crucified.

Send mail to cgcass0@uky.edu with questions about this site. This site was last updated on June 30, 2022. Copyright 2022, University of Kentucky, College of Agriculture, Food and Environment. An Equal Opportunity University. Site design : Academic Web Pages