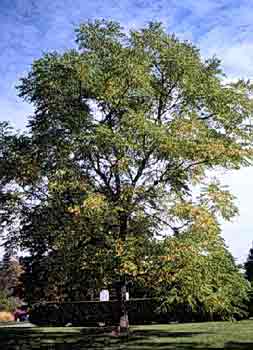 At one time the Kentucky coffeetree was the designated state tree. It occurs throughout Kentucky, but is most common in open woods in the Bluegrass. The common name comes from the seeds being used by pioneers as a coffee substitute. The Kentucky champion tree is in West Liberty in Morgan County and is 90 feet tall. It is one of the largest Kentucky coffeetrees in the USA.

Introduction: Kentucky coffeetree is a unique tree with large, woody pods and very large leaves made up of smaller leaflets. Its common name refers to the use of the pods by early settlers as a coffee substitute. With its bold form, contorted branching, unique bark and decorative clusters of large pods rattling in the wind, Kentucky coffeetree is an exceptional winter ornamental. Leaves emerge in late spring a striking pink-bronze color. As the beautiful, large airy leaves mature they become dark bluish-green above. The light, airy shade (semi-shade) of this tree makes gardening under it possible. This tree's yellow fall color contrasts nicely with the clusters of dark, maturing pods. 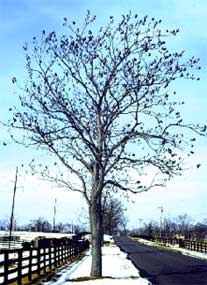 Culture: This urban-tolerant tree is adaptable to a wide range of soils and climates, and will survive in dry, compacted or alkaline soil. The Kentucky coffeetree prefers full sun and moist, rich soils. It should be pruned in winter or early spring. Kentucky coffeetree has no serious disease or insect problems. Litter can be a problem in spring when pods fall, and in autumn when the large leaves drop. Because of litter, Kentucky coffeetree is best suited for large areas such as parks. 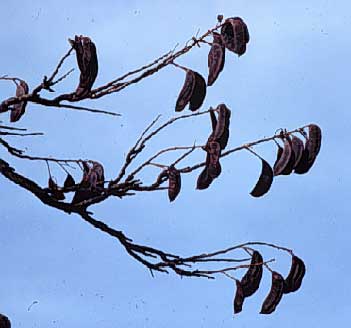 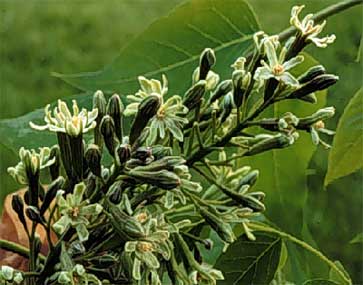 There are several cultivars of Kentucky coffeetree that are available in the nursery trade. They include selections that are predominantly male and do not produce fruit. These are preferred as street trees because the large pods can make a mess in early spring when they are shed from the trees in large numbers. Male selections include ‘Espresso.'

Although widely distributed, this tree is a rare forest tree and occurs in scattered populations. The national champion Kentucky coffeetree, 97 feet tall, is in Maryland.

The fruit of Kentucky coffeetree is a typical legume pod,but the flowers are not the typical pea-like form most people associate with legumes. There is some evidence to indicate that the Kentucky coffeetree was introduced into Kentucky by Native Americans, who used pulp from its wood to treat insanity. A tea made from leaves and pulp was used as a laxative. The seeds of Kentucky coffeetree were used by early settlers as a substitute for coffee. However, caution must be taken because the seeds and pods are poisonous. They contain the alkaloid cystisine that can be dangerous. Cystisine is thought to be neutralized in the roasting process. Cattle have died after drinking from pools of water containing fallen seeds and leaves from Kentucky coffeetree.

Gymnocladus dioicus is the botanical name for the Kentucky coffeetree. Gymnos is the Greek word for "naked" and klados is Greek for "branch." This name refers to the large, coarse branches (without smaller twigs) that remain after the rachis and petiole of the bipinnately compound leaves fall. The species name, dioicus, refers to the tree's dioecious nature.