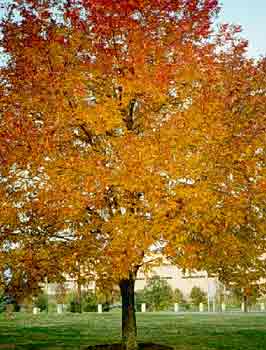 The most common ash in Kentucky is the white ash. It occurs in all parts of the state in woodland settings. The wood is very strong and used for a variety of uses including baseball bats and garden handles. The Kentucky champion tree is in Greenup County and is 125 feet tall.

Introduction: White ash is an impressive and popular tree in the urban landscape. The large, airy, two-toned leaves cast a pleasant shade in the summer. Attractive dark buds combined with interesting ash-gray bark that is furrowed into a braided pattern make this tree ornamental in the winter. White ash also has the most striking fall color of all the ash species. It is a common forest tree in Kentucky and is economically important as a timber tree throughout its North American native range.
Culture: White ash is a good shade tree for parks and large landscapes. Its shade is light enough to allow grass to grow under it. This species prefers full sun and deep, moist, well-drained soil but it will tolerate a wide range of moderate conditions. It does not tolerate drought when planted in a confined area. White ash should be pruned in fall. A number of potential pest problems are associated with ash but they are generally associated with stressed or newly transplanted trees. 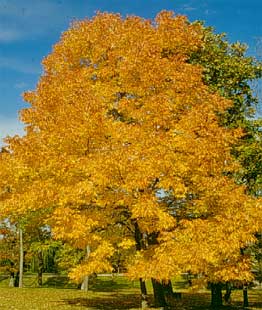 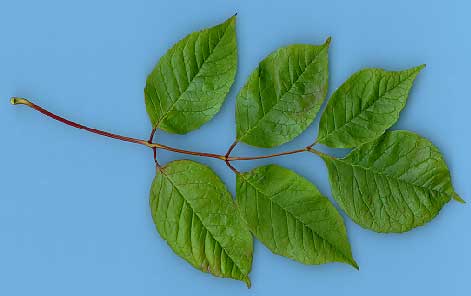 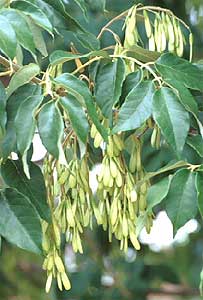 Additional information:
White ash is abundant and familiar both in the woods and in the urban landscape. It is the most common of all ash species in its native range. The 95-foot national champion is in Palisades, N.Y. Although a tough, urban-tolerant tree, white ash is not as adaptable as green ash. Its ornamental qualities, however, exceed those of green ash, and white ash is much less likely to suffer storm and ice damage.

White ash is a wonderful ornamental tree. The airiness of its dark green foliage contrasted with the white undersides of its leaves creates a nice shade. White ash has the most spectacular fall color of all the ashes. Using cultivated varieties, however, ensures consistent fall color.

The white ash genus name, Fraxinus, is from the Latin name for the Old World ash species. Ash belongs to the olive family and consequently has some unlikely relatives such as forsythia, privet, fringetree, lilac and olive. Fraxinus includes many economically important species because of its beautiful and useful wood. Its prized wood is strong and resilient but light in weight.

Because of its tremendous significance as a timber tree, ash has a well-developed Old World history and is incorporated into many ancient mythologies. The tree was thought to have the power to ward off snakes. When colonists arrived in the New World they quickly discovered wood of the New World ash species had the same superior qualities as that of the Old World ash species.

Of the North American ash species, white ash is the most valuable. Ash is used to make sports equipment (such as baseball bats and bowling alleys), tool handles and church pews. Its wood is also valued for making veneer and furniture.

Send mail to cgcass0@uky.edu with questions about this site. This site was last updated on February 25, 2020. Copyright 2020, University of Kentucky, College of Agriculture, Food and Environment. An Equal Opportunity University. Site design : Academic Web Pages