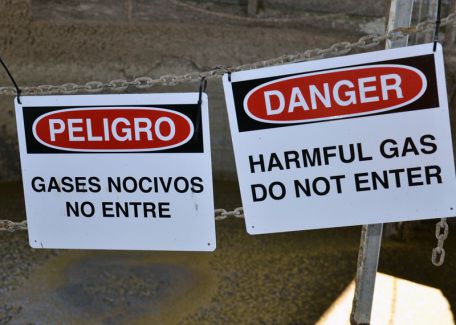 Three brothers working on a farm in Ohio died after passing out from fumes in a manure pit.

The local news site Hometown Stations first reported that the three men — Gary, Todd, and Brad Wuebker — were fixing a pump inside a manure storage pit at their family's livestock farm in the village of St. Henry in Mercer County.

Rescue crews found the men unconscious and unable to move in the pit Tuesday afternoon. They were fixing a manure pump before they passed out from the fumes, St. Henry fire Chief Matt Lefeld said.

According to the Mercer County Outlook, several squads, including a dive team and an air ambulance, were requested to help get the brothers out of the pit.

The brothers died the same day. Brad Wuebker, 35, died at the Fort Wayne Lutheran Hospital, while his brothers Gary, 37, and Todd, 31, died at the Mercer Health Hospital in Coldwater Village. A report by the Cleveland Fox affiliate Fox 8 News cited a preliminary autopsy for Gary and Todd Wuebker, which noted their cause of death as asphyxiation during a farm accident.

Agricultural safety is an issue in the US that concerns some 2.4 million farmworkers. According to the US Centers for Disease Control and Prevention, 416 farmers and farm workers died from work-related injuries in 2017.

Manure pits are common on large livestock farms and are used to store waste before it is used as fertilizer on fields. However, the pits can produce dangerous gases including hydrogen sulfide, methane, carbon monoxide, and ammonia.

"Nationwide data shows that most deaths occur during the summer months, a time when many producers are emptying pits," the NASD warned on its website. It also noted that these pits could be "unpredictable" because of varying factors like the stage of manure decomposition and wind conditions.

WHAT ARE THE HAZARDS?

There are several hazards associated with manure pits. Dangerous concentrations of gases such as hydrogen sulfide, ammonia, carbon dioxide, and methane can be produced when waste products break down. Since manure pits are confined spaces that are usually poorly ventilated, concentrations of these gases can quickly rise to levels that are immediately dangerous to life and health. These gases may also displace the oxygen in the pit, which may cause workers in the pit to suffocate due to a lack of oxygen.