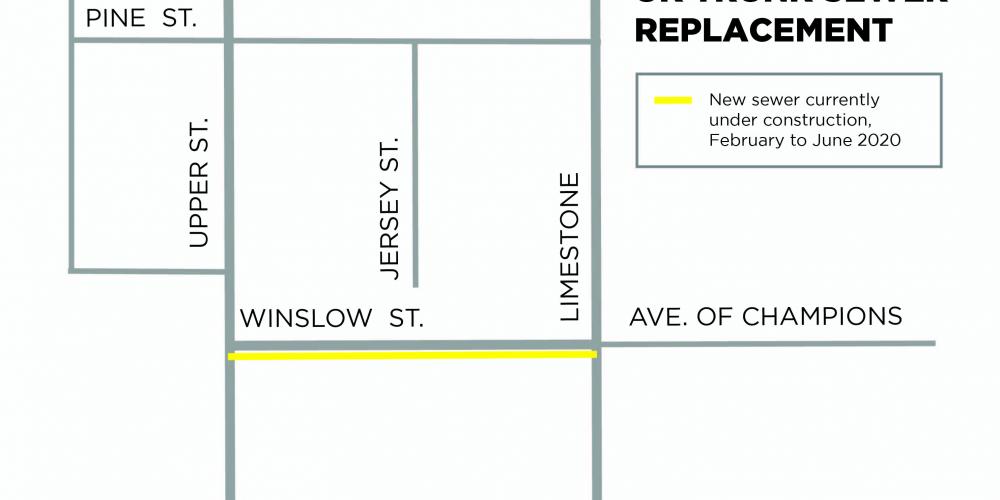 By Jennifer Myatt, City of Lexington -- Lexington is beginning work on the tough task of replacing two miles of sanitary sewer line between Oliver Lewis Way and Tates Creek Road. The project runs along Euclid Avenue through the University of Kentucky campus, and the Chevy Chase business district.

This project will take place during the same timeframe as the UK South Limestone Garage (PS #5) addition project, which is currently underway. One lane of Winslow Street was closed Jan. 29 and will run for two weeks to accommodate construction on the parking garage. The sewer project is expected to extend that lane closure for the rest of the semester. The campus White Route buses (Route 14) and the Red Mile Route (Route 15) will be rerouted during the Winslow lane closure. Buses will be diverted down to High Street. View map here.

The two-year sewer project will cost $10.93 million and is part of the city’s obligations under the court-ordered consent decree with the Environmental Protection Agency to improve Lexington’s sanitary sewers.

“We have looked at multiple options over the course of the last two years because it’s obvious to everyone that this project will be hugely disruptive,” said Charles Martin, director of the Division of Water Quality. “Construction in urban areas is always hard, and for an area as densely populated as the streets around campus, options are very limited. We believe that what we’re about to do is the least disruptive, viable option.”

Crews are bringing in equipment and materials starting this week. One lane of Winslow Street, which runs one way between South Limestone and South Upper Street, was closed in late January for work related to the University of Kentucky’s parking structure. It will remain closed for staging and construction of the sewer pipe. It is anticipated that the sewer construction will keep one lane of Winslow closed for three months.

Boring on Winslow is expected to begin Feb. 17 with sewer pipes going in the ground starting Feb. 24.

The weekend of March 14 and 15, a new manhole will be installed in South Upper Street, and 40 feet of pipe will be laid to connect the manhole to the Winslow sewer. South Upper will be closed at Winslow starting at 7 p.m. Friday, March 13, and will reopen no later than 6 a.m. Monday, March 16. Contractors hope to finish the work during the weekend. However, weather or conditions beneath the road may slow progress. If the project isn’t completed over the weekend, nightly shutdowns will be scheduled to allow for completion of the project.

As Lexington proceeds with sanitary sewer construction, Kentucky Utilities and the University of Kentucky will move forward on projects in the same area to minimize overall disruption to campus and commuters.

A second sewer crew is also beginning work on a sewer pipe installation running from Patterson Street to South Broadway this week. This segment of the project will have limited traffic impacts on Chair Avenue and Emmaline Lane.

The second crew is expected to complete the Patterson/Broadway segment this winter, and bore under South Broadway in the spring. South Broadway will remain open. During the summer and fall of 2020, the project will move along Bolivar to Upper Street and then connect to the pipes laid along Winslow.

Over the summer, the sewer project will also move on to Avenue of Champions until the end of 2020. At that point, construction will proceed down Euclid, all the way to project completion in early 2022 at the Tates Creek Road intersection.

The original sanitary sewer was built in 1934 and is in disrepair, with defects and leaks that are difficult to reach. The pipe runs under many buildings, including the UK College of Fine Arts Building. Because the sewer is inaccessible in its current location, the new line is being laid in the street for easier access in case of repairs or other issues.

While this sanitary sewer project will be disruptive in the short term, it will improve Lexington’s water quality down the road. Though the federal consent decree to improve the city’s sewers is driving the timeline, the benefit to water quality in our local creeks and the increased sewer capacity for future growth makes this project a necessity.

“Over the next two years, we’ll need to keep reminding ourselves that this project is a short-term problem that provides a tremendous long-term community benefit,” Martin said.

Lexington residents, commuters and visitors are encouraged to visit LexingtonKY.gov/EuclidSewer for traffic information and updates about the project.

Sorry, we could not come up with any suggestions based off this posts tags.