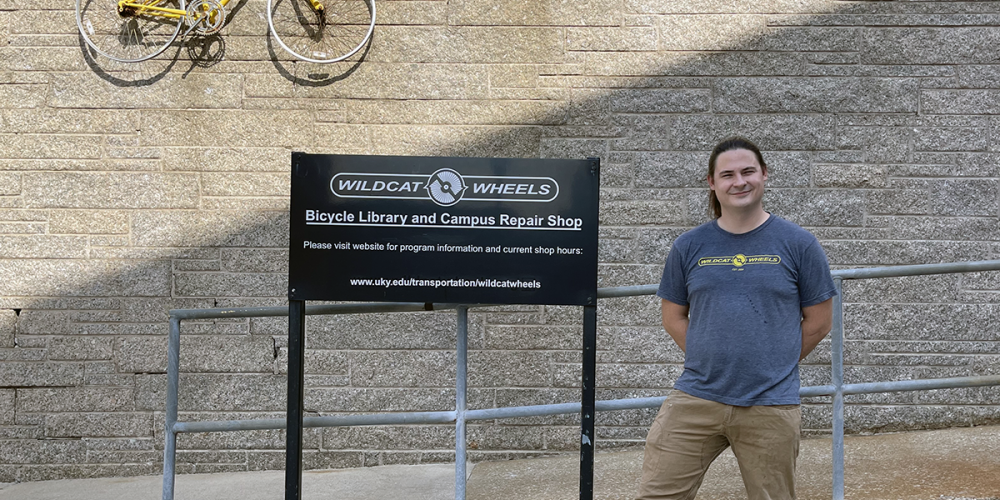 William York Varney III -- better known as Will to his friends -- recently accepted the newly created position. He isn’t exactly new to Wildcat Wheels, though. Will has worked part-time in the shop since he first arrived at the University of Kentucky in Fall 2013 and has served as part-time student shop manager since Fall 2017. He also worked as a mechanic locally at Broomwagon Bikes & Coffee and Schellers Fitness & Cycling in Lexington.

Will says one of his biggest challenges in this new role will be looking at the shop and its processes with fresh eyes, since he’s been there for several years.

WWBL serves as a cycling resource for both students and employees on campus. It offers free bicycle maintenance and repair assistance, as well as access to cache of standard recycled bike parts. WWBL also provides a variety of free bike check-out options for both short-term and long-term use. It’s located on the first floor of Blazer Dining.

As manager, Will is responsible for providing top-notch service and for managing the shop’s fleet of up to 300 bicycles. He’ll also supervise student employees, who can number up to seven at a time. Purchasing, budgeting, and educational outreach are also among his responsibilities.

One of Will’s main goals is to expand UK’s bike culture and encourage both students and employees to explore all their cycling options. So far, he’s adjusting to his new role and says that “everyone at UK has been nice and welcoming.”

Will grew up in Chicago, but much of his family is from Kentucky. He says most of his life has been spent in and around the cycling community.

Will credits his mom with introducing him to his first bike. When he was 10 years old, he won a raffle for a mountain bike and went with his mom to claim the prize. It was then that he discovered the feeling of freedom that bicycles can provide.

“I rode that thing all around Chicago,” said Will. “It gave me the freedom to explore.”

At 26 years old, Will has been working in some capacity for at least 13 years. He started out as a part-time employee in a bike shop at age 13. Even prior to that, he worked with his father, who is a general contractor.

“My dad definitely took advantage of those child labor laws,” Will said with a laugh. He said his dad instilled in him the ability to envision what “could be” and introduced him to working on all types of equipment.

In addition to his new job, Will is also completing a degree in mechanical engineering and minors in philosophy and mathematics. He’s currently attending UK part-time.

Will reports to Sandra Broadwill, Transportation Services’ Alternative Transportation Manager. Sandra said she’s happy to have a full-time manager at Wildcat Wheels, someone who can effectively oversee the busy shop.

“Wildcat Wheels has been managed and run by students for its entire history on campus,” said Sandra. “The students have done such a beautiful job making the space what it is and helping so many people. But students graduate and move on, and institutional knowledge can be lost. Plus, students’ schedules make the hours at Wildcat Wheels sometimes hard to predict for visitors. With a new full-time manager, we can not only ensure that the program continues to grow and improve, but also that it will become a more reliable and accessible service for anyone who rides or wants to ride on or around campus. I’m excited to see Will step into this role and where he will take this legacy bicycle program in the future.”

Lance Broeking, director of UK Transportation Services, said the establishment of a full-time manager for WWBL is a significant step in the department’s investment and ongoing commitment to alternative transportation initiatives. UK has been recognized at the national level for its commitment to cycling, most recently in 2018 when the University was named a gold-level bike friendly campus by the League of American Bicyclists. Bicycling Magazine also named UK the most bike-friendly college in America that same year.

Sorry, we could not come up with any suggestions based off this posts tags.