What causes Down Syndrome?

In every cell in the human body there is a nucleus, where genetic material is stored in genes.  Genes carry the codes responsible for all of our inherited traits and are grouped along rod-like structures called chromosomes.  Normally, the nucleus of each cell contains 23 pairs of chromosomes, half of which are inherited from each parent.

Down syndrome is usually caused by an error in cell division called "nondisjunction."  Nondisjunction results in an embryo with three copies of chromosome 21 instead of the usual two.  Prior to or at conception, a pair of 21st chromosomes in either the sperm or the egg fails to separate.  As the embryo develops, the extra chromosome is replicated in every cell of the body.  This type of Down syndrome, which accounts for 95% of cases, is called Trisomy 21.

What is Alzheimer’s disease?

Alzheimer’s disease is the most common form of dementia in the elderly (accounting for 60-80% of patients) and in people with Down syndrome.  Currently, in the United States over 5.3 million people have the disease.  Alzheimer’s disease is a dementia that includes the loss of memory and other thinking skills.  People diagnosed with dementia usually show:

There are several warning signs of Alzheimer’s disease but it is important to remember that change in function is the most important indicator:

What are the brain changes that happen with Alzheimer’s disease? 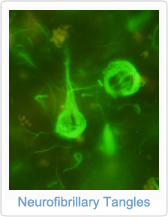 Several changes must occur in the brain for a final diagnosis of Alzheimer’s disease.  Two types of neuropathology are thought to cause dementia in this disease including neurofibrillary tangles and beta-amyloid plaques.

Inside the brain are nerve cells (neurons).  Inside of neurons there is a normal protein called tau that is important for proper functioning. In Alzheimer’s disease, tau becomes abnormal (hyperphosphorylated) and this leads to a twisting up of long filaments (strings) that fill up the neuron and prevent it from functioning properly.  Eventually, neurons die from these changes leading to many disconnections between neurons and between different parts of the brain.  When this happens, the clinical signs of dementia can be seen. 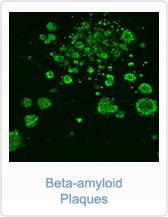 Why are people with Down syndrome more vulnerable to Alzheimer’s disease? 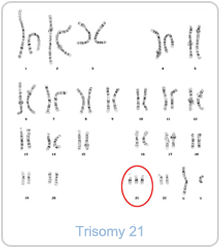 Not all adults with Down’s syndrome develop dementia

Importantly, not all older adults with Down syndrome develop dementia despite making too much beta-amyloid protein.  This means that some people may tolerate or compensate for these changes in the brain. This also means they can still function well on a day to day basis without the clinical signs of dementia.  If, through research, we can learn how this happens, then it may be possible to develop ways to prevent or treat Alzheimer’s disease in people with Down syndrome.  This is one of the long term goals of our longitudinal aging study – to discover new approaches to prevent Alzheimer’s disease in Down syndrome as people get older.