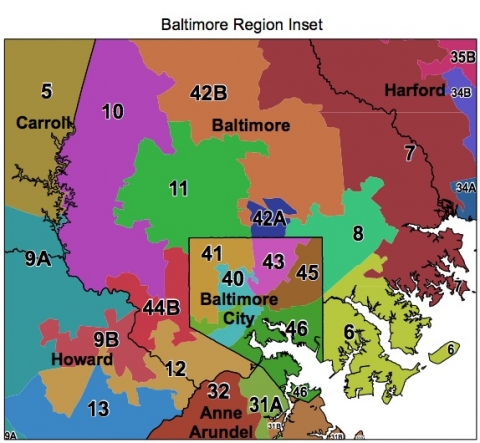 Election law continues to be an important topic in national news. Indeed, every year the U.S. Supreme Court decides a few election law cases.  This year is no exception. This term, the Supreme Court will decide Shapiro v. McManus and Evenwel v. Abbott. This post will discuss Shapiro.

Shapiro v. McManus, which the Court is hearing arguments in tomorrow, concerns a group of Maryland citizens who sued the Chair of the Maryland State Board of Elections and its Administrator, arguing that a 2011 redistricting plan was, in fact, a partisan gerrymander. A partisan gerrymander occurs when the line drawers manipulate an electoral district’s boundaries to favor a certain political party—typically the majority party in power who is drawing the lines.

After the case was filed, the defendants moved to dismiss the lawsuit under Federal Rule of Civil Procedure 12(b)(6), a defense which asserts that the plaintiff failed to state a valid legal claim. The case, which was reviewed by one district judge, was dismissed, with the judge holding that the complaint did not sufficiently assert the presence of misconduct in the line-drawing process. The court analyzed the complaint under a standard set forth in two recent Supreme Court cases, Bell Atl. Corp. v. Twombly and Ashcroft v. Iqbal which in essence require a claim to be “plausible” to survive this preliminary stage of litigation The Fourth Circuit Court of Appeals affirmed the lower court’s ruling.

Yet the resolution of this case involves a key procedural question for redistricting disputes: who is actually supposed to decide the case?  The Three Judge Court Act, passed by Congress in 1910, requires that cases concerning the apportionment of congressional districts or any statewide legislative body be reviewed by a panel of three judges (two district court judges and one appellate judge, sitting together as a panel), unless the claims are “unsubstantial.” But here, the single district judge did not send the case to a three-judge court because it found the claims to lack merit.

The plaintiffs who are challenging the map argue that the single judge incorrectly dismissed the case both because it did not have the power to do so and because their claim of partisan gerrymandering is not “insubstantial.”  They also dispute the Court’s use of the Twombly and Iqbal standards mentioned above to judge the sufficiency of the complaint.

The state officials, by contrast, assert that there is nothing in the text of the Three-Judge Court Act which prevents a single district judge from dismissing a case because of a failure to state a claim under the applicable standard. Professor Howard M. Wasserman of the FIU College of Law, writing for the SCOTUSblog (a blog about the Supreme Court of the United States) sums up the state officials’ argument that the statute “empowers the single judge to determine that three judges are not required, but it does not prescribe or limit the reasons the judge might reach that conclusion.” That is, the state officials argue that the single judge may use his or her discretion to dismiss a case before sending it to a three-judge court.

In an amicus brief supporting the plaintiffs filed with the Court, (a brief filed with the Court’s permission by someone who is not a party to the action but who has a strong interest in the subject matter) two election law scholars, UK Law Professor Joshua A. Douglas and University of Cincinnati Law Professor Michael E. Solimine, assert that instead of reviewing the pleadings under the standard set-forth in Rule 12(b)(6) and the Twombly and Iqbal cases, the single judge instead was required to review the claims to determine if they were “obviously frivolous,” and if they were not “obviously frivolous,” then they should have been referred to the three-judge panel. They also assert that failing to refer these cases to a three-judge panel does not comply with the policy goals Congress sought to achieve with the Three-Judge Court Act.

These questions, which will determine the correct procedure for lower federal courts to follow in future cases arising under the Three-Judge Court Act, are important because they will determine the viability of many redistricting claims moving forward.  This is for two main reasons: first, three judges might be better in helping to reduce any actual or perceived ideological bias in cases involving politics.  Second, the decision of a three-judge district court is directly appealable to the U.S. Supreme Court, while a decision of a single judge must go through the court of appeals, and review at the Supreme Court is only discretionary – meaning that the Court may never hear the case.  This Maryland case is a good example: if the Court reverses and sends the case back for a three-judge district court, then that panel’s decision on the merits of the partisan gerrymandering claim will be directly appealable to the U.S. Supreme Court. But if the Court rules that a single judge may dismiss the case initially, then the Court will never have a chance to rule on the merits of this partisan gerrymandering dispute.

Ultimately, then, the seemingly-arcane procedural issues in this case matter a lot in determining how courts will police redistricting for years to come.