People Map
Home / Will Rand Paul Have to Choose Between Running for the Senate and the Presidency?

Will Rand Paul Have to Choose Between Running for the Senate and the Presidency? 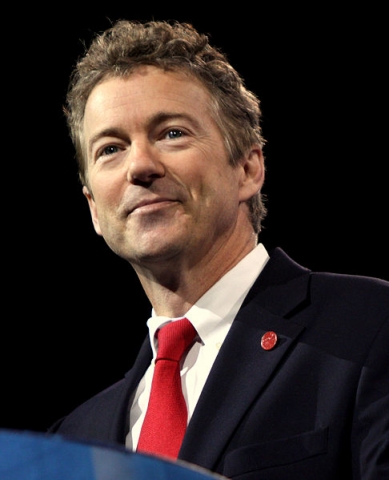 The 2014 races are down to the wire, but many commentators are already looking ahead to a pinnacle question of 2016: Will Rand Paul run for President, reelection to the Senate, or both?

Kentucky law  explicitly prohibits a candidate from seeking two offices at once. Senator Paul is up for reelection to his Senate seat in 2016, which coincides with a presidential race for which Paul seems to be positioning himself.

Paul faces no issues running for president in any state except Kentucky, where he would theoretically hope to be on the ballot as both a senatorial and presidential candidate. The Republican-controlled Kentucky Senate passed a bill  in 2014 to allow federal candidates to simultaneously be on the ticket for President or Vice President and another office. However, it failed to pass in the Democrat-controlled House. This type of law is referred to as an “LBJ law” because Texas passed a similar statute in 1959 to allow Lyndon B. Johnson to simultaneously run for reelection to his Senate seat and seek the Office of the Presidency in 1960.

Republicans still control the Kentucky Senate, and if they gain control of the House this week, Democratic Governor Steve Beshear will be a lame duck governor through 2015. Republicans could then reintroduce and pass an LBJ law – and Beshear could potentially sign it into law or let it pass into law without his signature.

If Beshear vetoes the legislation, but a Republican wins the Governor’s Mansion in 2015, the Governor-elect would be sworn into office on December 8, 2015, the General Assembly would begin on January 5, 2016, and the filing deadline for federal office would fall sometime at the end of January (in 2008, the last time Senate and Presidential elections coincided in Kentucky, the filing deadline for both was January 29 ).

Given this timeline, and assuming a Republican-controlled state government, an LBJ law could pass in time for Paul to run for his Senate seat and the presidency simultaneously, and the Secretary of State would have plenty of time to print enough ballots for Kentucky’s May 2016 primary.

If legislation fails, another course of action would be a legal challenge against Kentucky’s prohibition on seeking two offices at once. In U.S. Term Limits v. Thornton, the Supreme Court held that states may not impose additional candidate qualifications beyond those that exist in the US Constitution for candidates seeking federal office.

While courts have approved state laws prohibiting candidates from appearing on the ballot twice for the same office as the nominee of two different parties and from running for a state legislative office while holding another office, the qualifications for running for federal office are listed in the Constitution, and are limited to age, citizenship, residency, and, for the presidency, the number of presidential terms already served.