by Mayte Hernandez-Murillo, Biochemistry major, University of Kentucky Class of 2018

Growing up I never really understood what it meant to be a woman in STEM. I had male teachers in all my science classes except for my AP chemistry teacher. She was my first female mentor and encouraged me to pursue chemistry. Girls success in interest in science and math depends on the effects of societal beliefs and the learning environment.1 Since none of my male teachers had ever encouraged me to peruse science, I never thought that could be a possibility.

That first impression of chemistry with my AP chemistry teacher gave me a push forward into science and I became a biochemistry major here at the University of Kentucky. With the class size being over 100 people it didn’t seem like there was a problem. As I moved to higher level chemistry classes the number of female chemists disappeared. Male first year college student are more likely to say that they are STEM majors, but by graduation only 20% of the female graduating class ends up earning a STEM degree.1 This is when the imposter syndrome first hit me. I had to take general physics along with all the engineers. Since my lab partners were male and experienced with the programs used in class, they would often take over the experiment and not let me participate. Their engineering fraternity provided them with a network of people they could access questions, tutoring, and other resources. Since I was not part of support group in the sciences, I felt like I was alone.  How is it that I’ve made it two years through my college education and yet I feel like I didn’t deserve to be there? Imposter syndrome is the feeling that you aren’t qualified for the work and having the anxiety that one day you will be found out as a fraud. I did not internalize accomplishments and I felt like I was competing for second best because I knew first place would go to the male in the class.

My lack of confidence was inhibiting the way I performed in class. If answers didn’t come to me as easy as the males in my class, I would find myself questioning myself because I did not fall into the stereotype of male in a white lab coat. I was a victim of the “stereotype threat.” Even women who are strongly associated with their STEM field are susceptible to its effects. This phenomenon is the fear of doing something that would confirm that stereotype. In a study done in 1999 at Michigan state university, 30 females and 24 males were split into two groups. One group was told men performed better than women on the test, this was the “threat condition”. As a result, the female students in this group performed significantly worse. (Figure 1) 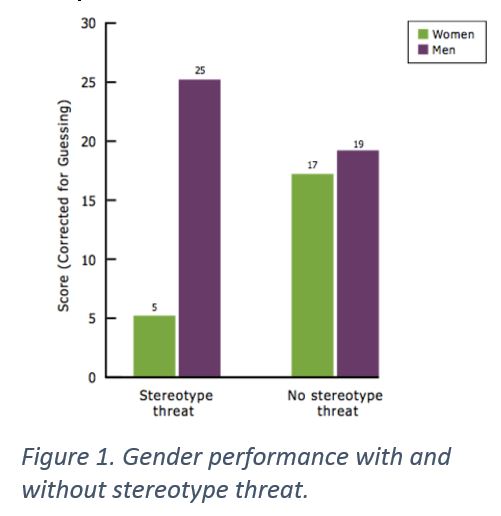 This test proved that if the stereotype threat was removed then women would perform just as well as the men.  The stereotyped individuals in this group often made more of an effort and this was evident in my studies. I was reading, practicing problems, talking to professors, and still it felt like I was coming up short. I needed to simply make myself aware of this stereotype. To overcome the need to feel accepted by the scientific world when in fact I just need to associate myself with chemistry and I could be the one in the white lab coat.

I did not believe the stereotype that girls and women were not as good as men and boys. Subconsciously, however, according to Harvard’s implicit association test (IAT), I did. This test measures the association between math-arts and male-female. These less-conscious beliefs underlying negative stereotypes continue to influence not only my behavior but everyone’s around me too. Since the establishment of this test in 1998, there has been a 70% association of male with science and female with the arts. This proves that a bias against women in STEM fields is not a thing of the past. It’s not that girls say that they cannot do math, it’s that they cannot identify with it. This crucial difference reveals that when girls and women cannot identify themselves with a particular path. Once I started associating with chemistry and math, I found myself doing better in my classes.

I will be graduating in May and now I fear that the implicit bias will follow me to the workplace. Women in “masculine fields” such as STEM typically ranked less competent than their equally qualified male counterpart. This ranking was not the same in “female” or gender neutral careers. In a conducted study by Heilman, it was reported that a successful woman in a male career are more likely to be disliked as well if they did not exemplify the classic character traits such as caring, understanding, and concerned about others1. There is a struggle to keep a balance between competent and being likeable. My experiences with Dr. Sylvia Cerel-Suhl have showed me how she has overcome these obstacles and become a strong representation of the woman in the STEM field. She is a local physician with lots of networked and has opened up several opportunities for me. 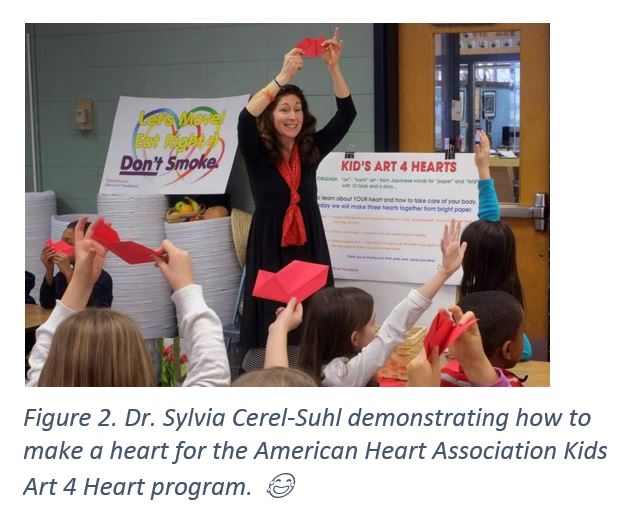 She has shown me that stereotypes have not set boundaries on her but have she pushed her to dig into new fields of research. Her love for teaching kids inspired her to work with origami and different age groups. It’s inspiring seeing how she is very confident and can engage any audience. Her origami was recently put into a study to show how working memory could be improved.

This semester I will be working with a cognitive training platform that claims to increase general cognitive function that usually declines in late-life. The previously reported cognitive interventions were reading aloud and practice origami showed successful working memory manipulation and its correlation with frontal alpha power as detected by EEG. I hypothesized that the reading aloud and origami intervention would improve alpha power in order to improve working memory. I will be working with Dr. Yang Jiang and I think she and Dr. Cerel-Suhl will continue to help me overcome my challenges and continue to be a strong woman in STEM.