Plums, like peaches, are stone fruits and in the Rose family. These two crops have similar cultural requirements, as well as similar disease and pest concerns. Plums are also sensitive to late spring frosts, which can result in crop losses in Kentucky. Depending on the type and cultivar, plums can be consumed fresh, canned, frozen, processed in jams and jellies, and dried.

Kentucky plums are currently grown for the following fresh market outlets: farmers markets, roadside markets, local retail outlets, and community supported agriculture (CSA) subscriptions. Plums can also be sold at produce auctions and marketed through farm-to-institution programs. Value-added plum products, such as preserves, can help extend the market season. Like all new enterprises, growers should define their markets before planting, especially for crops such as plums that have a limited market. Plum production in Kentucky remains a risky endeavor because trees frequently suffer losses when a spring freeze occurs during bloom. Because fruit production is unpredictable, growers should not consider plums as a primary crop. Instead, plums are best only grown commercially as a secondary fruit crop (to peaches, for example) or as part of a diversified farming operation. Additionally, current growers have found that the market is limited, so extensive plantings are not recommended. 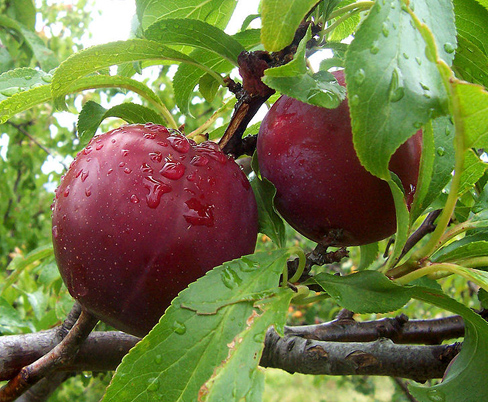 Selecting hardy cultivars that bloom late, produce quality fruit, perform reliably, and meet the market demand is a critical step in establishing a plum planting in Kentucky. There are three main types of plums grown in Kentucky: European (Prunus domestica), Damson (P. insititia), and Japanese (P. salicina). Of these, late blooming cultivars of the European and Damson types generally perform best under Kentucky conditions. Damsons are mainly used for culinary purposes due to their small size and tart flavor. The familiar Stanley cultivar is a European plum. Most Japanese (or Oriental) plums bloom so early that they generally suffer losses from frost. However, there are exceptions: one commercial orchardist in Kentucky considers the cultivar Shiro one of his more consistent bearers.