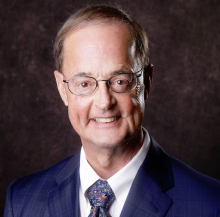 Mr. Berry of Eminence, Kentucky, is a 1968 graduate of Eminence High School. He received a Bachelor of Science Degree in Civil Engineering from the University of Kentucky in 1973.  He is a licensed professional engineer, land surveyor, a certified construction manager and a past member of the Board of Governors, Construction Managers Association of America.

Mr. Berry has served on the Board of Directors, Fifth Third Bank, State of Kentucky, an Elder, Board Chairman and Sunday School teacher of the Eminence Christian Church, and is an Elder at Henry Christian Church.  He was an Eminence School Board Member for seven years and volunteer athletic coach for track and tennis at the Eminence Independent Schools. Mr. Berry was inducted into the inaugural class of the Eminence High School Hall of Fame in 2005.