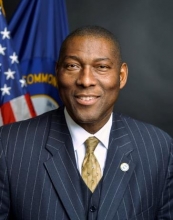 Derrick Ramsey personifies leadership, most notably as an All-American football player and nationally-recognized Athletic Director, and through his service to public office in the Commonwealth.

While these accomplishments over the last 40 years have occurred in various arenas, Ramsey's commitment to success and his gift for building consensus along the way has remained a cornerstone of his legacy at each stop.

In 1975, Ramsey became the first African-American starting quarterback in the University of Kentucky's history. Two years later, he not only led the Wildcats to a 10-1 season at the helm, but also earned numerous personal accolades, including recognition as a First Team All-Southeastern Conference and Third-Team All-American.

After a successful nine-year NFL career, including winning a 1981 Super Bowl ring, he soon became a small business owner managing real estate and personal investment portfolios. This time away from the gridiron also gave him the opportunity to complete his undergraduate degree and go on to obtain his Master's Degree in Sports Administration from Eastern Kentucky University.

In 1994, Ramsey returned to his alma mater to become a Community Relations Officer at the University of Kentucky. In this role, he successfully brought together members in the African-American community of Lexington with the University, where he helped foster a growing partnership. Five years later, he became the Athletics Director at Kentucky State University. Here, he went to work on improving the institution's facilities including planning, coordination, and implementation of a 5,000-square-foot academic, fitness, and weight training center for student athletes. By creating an innovative Student Athlete Excellence in Academics Program, he helped the Athletic Department produce more Presidential Scholars than any other department on campus.

In 2004, he began his first stint in a state government role when he was appointed Deputy Secretary of Commerce in the Governor Fletcher Administration. While here, he oversaw a $50 million budget and helped manage human resources for the Cabinet. During his tenure, Ramsey was also a part of a delegation that successfully brought the renowned 2010 World Equestrian Games to Kentucky.

Soon after leaving office, Ramsey began serving as the Director of Athletics at Coppin State University in Baltimore in 2008. During his seven years in this role, he led the department to unprecedented heights of accomplishment, including routinely posting department-wide 3.0 grade point averages and steadily increasing graduation rates.

In December of 2015, newly-elected Kentucky Governor Matt Bevin called on Ramsey's proven track record by asking him to once again serve the citizens of the Commonwealth, this time as Secretary of the Kentucky Labor Cabinet. In 2018, Governor Bevin then appointed him as Secretary of the Education and Workforce Development Cabinet. "Derrick has worked tirelessly for the past 30 months, as Labor Cabinet secretary, on behalf of Kentucky's working men and women," said Bevin. "He has devoted himself to ensuring that Kentucky is the best place in the country to work, and he understands the unique challenges that are before us as we educate and prepare our next generation of workers."