Although bell pepper (Capsicum annuum) is a warm-season annual when grown in temperate regions, it is actually an herbaceous perennial when cultivated in tropical areas, such as its native Latin America. Bell peppers are considered “sweet” since they lack the pungent chemical (capsaicin) present in hot peppers. 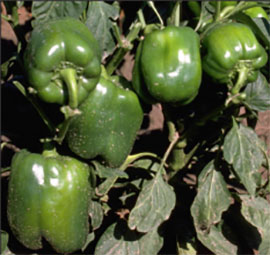 Peppers are grown in Kentucky primarily for fresh market sales. Fresh market options include roadside stands, local wholesalers and retailers, wholesale markets, farmers markets, community supported agriculture (CSA) subscriptions, produce auctions, restaurants and institutional foodservice. Bell peppers were one of the top three fresh vegetables with acreage increases in Kentucky during the early 2000s. In the past Kentucky farmers also grew considerable acreages of peppers for processing, but that ended when the processing companies closed or moved out-of-state. California and Florida dominate fresh bell pepper production, producing about 80 percent of annual volumes. Other major producers include Georgia, Michigan, New Jersey, North Carolina and Ohio. The U.S. continues importing fresh bell peppers from Canada, Mexico and Europe to satisfy increasing consumer demand. Bell pepper use per year increased in the U.S. from 8 pounds per capita in 2000 to just under 11 pounds per person in 2014. Per capita use remained around 11 pounds per person through 2017. Greenhouse-grown peppers imported from other countries have increased year-round supplies for U.S. consumers. Although consumption increases have slowed since the early 2000s, fresh bell peppers (including organic peppers) remain a growth category for produce growers in Kentucky and nationwide. 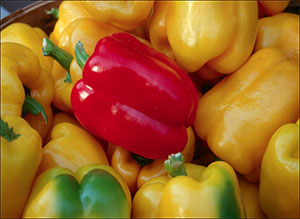 Bell pepper varieties differ in such horticultural traits as fruit size, shape (e.g. blocky versus elongated), number of lobes, flavor and disease resistance. Standard green bell varieties typically ripen to red when left on the plant long enough; however, specialty bell peppers include varieties that ripen to colors other than red. These specialty bells may be yellow, orange, brown, white, and even purple at maturity. Compared to green bell peppers, colored bells are more difficult and expensive to produce because a longer time to maturity is required. Growers should select only adapted varieties that have the qualities in demand for the intended market. Due to the prevalence of bacterial leaf spot in Kentucky, only hybrid varieties with leaf spot resistance are recommended for commercial production. While resistance to bacterial leaf spot has helped reduce losses to this devastating disease, new races of the pathogen have been isolated to which there is currently no resistance.

See the full crop profile and other resources below.