The potato (Solanum tuberosum) is a cool-season plant originally from the Andes Mountains of South America. The tubers are underground stems, not roots. Potatoes are most often grown in Kentucky as an early crop for fresh market consumption. 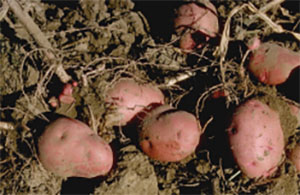 Fresh market options include farmers markets, produce auctions, cooperatives, community supported agriculture (CSA) shares, and roadside stands.  Per capita potato use in the U.S. declined from the 1990s into the early 2000s, from about 135 pounds to 125 pounds per year for both processing and fresh potatoes. Per capita potato use continued declining from 2006 to 2016, though not at the rate of the previous decade. Fresh market potato consumption was estimated to be from 33 to 35 pounds per capita annually from 2012 to 2016 while consumption of processing potatoes was 78 to 80 pounds. Opportunities also exist for the production of small “new” potatoes, russets, heirlooms and other specialty types for local markets, sales to restaurants or sales to local/area wholesalers. Sales of very small “mini” or “creamer” potatoes (1 to 1½ inches in diameter) are also possible and command premium prices in some markets. 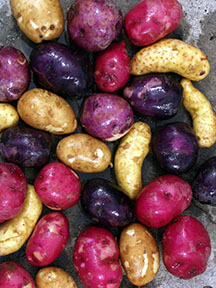 Potato cultivars differ in such tuber characteristics as skin color (white, shades of red and purple tones), flesh color (white, yellows, blue and purple), shape (elongated to round), eye depth (shallow to deep), skin texture (smooth to rough) and size. Varietal differences also include earliness (early, mid- or late-season) and use (baking, chipping, all purpose). Disease resistance/tolerance to scab, early blight, late blight and blackleg are available in some varieties. “New” potatoes are often red-skinned, but can be any variety that is harvested early in the season when tubers are 1½ to 2¼ inches in diameter. Gourmet or mini potatoes are produced from varieties that tend to yield high numbers of small tubers. Fresh market producers may want to consider adding heirloom cultivars to their mix, along with specialty cultivars. Commercial growers should select only well-adapted varieties that have the qualities in demand for the intended end-use and market.

See the full crop profile and other resources below.