There are several small-scale renewable energy projects on campus. These include solar photovoltaic systems on the Davis Marksbury and Ralph G. Anderson Buildings; a solar thermal system at the Poundstone Regulatory Service Building; and a ground source geothermal system providing heating and cooling for Donovan and Johnson Halls. SKY Blue, the UK Solar House project, and the College of Engineering's Solar Car team are also exciting initiatives that have integrated renewable energy into the curriculum and research of the university. 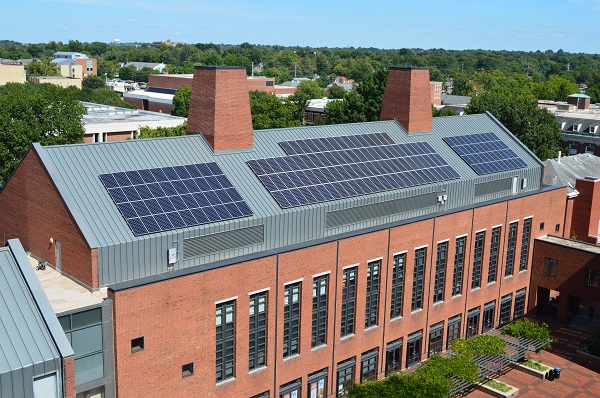 In the spring of 2013, a graduate level Electrical Engineering class conducted a solar feasibility analysis of the University of Kentucky’s campus. They identified the roof of the R.G. Anderson Building as a low cost, high output opportunity as it was nearly ideal from the perspective of orientation, existing roof type, and proximity to curious engineering students. The work of the students in this course led directly to a 2015 partnership between Facilities Management and the Student Sustainability Council to co-fund a 56 KW array on the roof. This array, completed in the spring of 2016, is the largest of three solar PV installations on our campus and includes a web-based monitoring system that provides near real-time details on power production. The system produces approximately 3% of the annual demand of this large teaching and research building - enough power for 3-4 homes. The estimated payback on the approximately $190,000 installation is just over 20 years, but with the students funds considered as an incentive program, the physical plant’s investment has a 10-12 year financial payback with the added benefit of providing students with new learning tools. 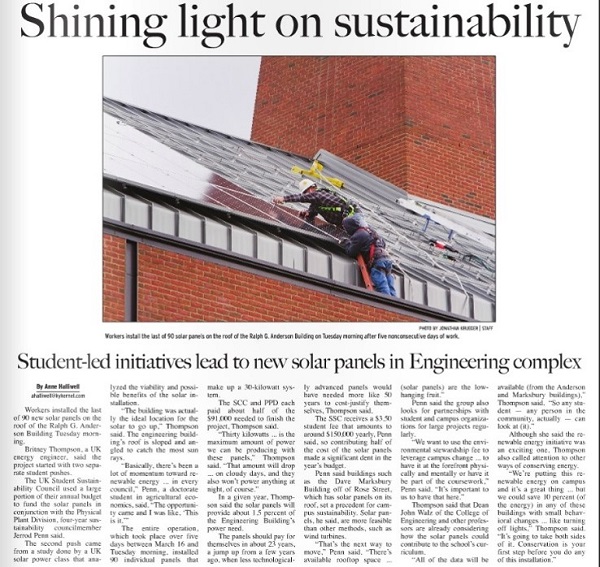 “Not only will the facility help power one of our buildings; it will also be a great teaching tool for our students" –Dean John Walz, College of Engineering

The Solar PV Array at R.G. Anderson Hall is situated above the Engineering Complex Courtyard on the south facing standing seam roof. Phase 1 is the central portion of the array and consists of 90 Suniva Optimus Series 325 Watt Monocrystalline Solar Panels, with a nominal module efficiency of 16.79%. Five strings of nine connected panels feed each of two Solectria PVI 14TL Inverters located inside the penthouse. An irradiance meter, weather station, and Solrenview Web-Based Monitoring System were installed during this initial phase to allow for public reporting of production data. This array has a rated capacity of 29.25 kWdc and was completed in Spring 2015.

Phase 2 was completed in the Summer of 2016 and covered each end of the remaining roof with a total of 80 SunPower E-Series Residential 327 Watt Monocrystalline Solar Panels. These panels were selected due to their higher nominal module efficiency of 20.4%, which offers a maximized output. Five strings of eight panels feed each of the two additional Solectria PVI 14TL Inverters located on the exterior of the penthouse below the array. Phase 2 has a total rated capacity of 26.16 kWdc. Data for both Phase 2 inverters is reported through the existing Solrenview System. 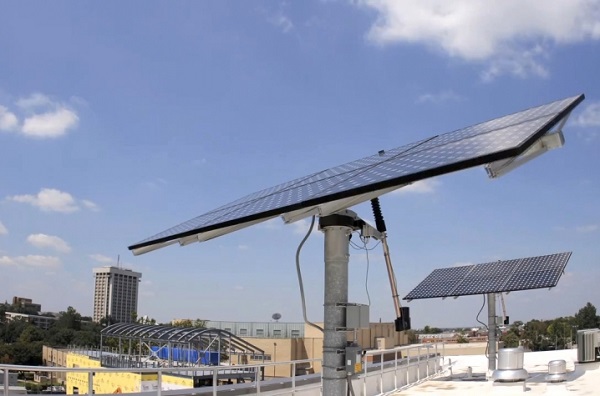 The first solar array constructed on UK’s campus is found at the Davis Marksbury Building on the northern edge of campus. This installation was part of an effort that earned the Marksbury Building UK’s first LEED Gold Certification. The 25.6 kW Roof-Mount, Grid-Tie Solar PV Array consists of 72 stationary SunPower 305-watt modules and 12 sun-tracking SunPower 305-watt modules on Wattsun AZ-225 dual axis trackers. The fixed panels are on the uppermost section of the penthouse roof and are oriented toward Rose Street. The trackers are visible atop the south end of the building and use optical sensors to orient themselves perpendicular to the sun’s rays. The system uses Satcon and SMA inverters and has online monitoring to display the power production data. The annual estimated energy production of the system at installation in October 2010 was 29,000 kwh, which was projected to cover up to 3% of the building’s annual power needs. 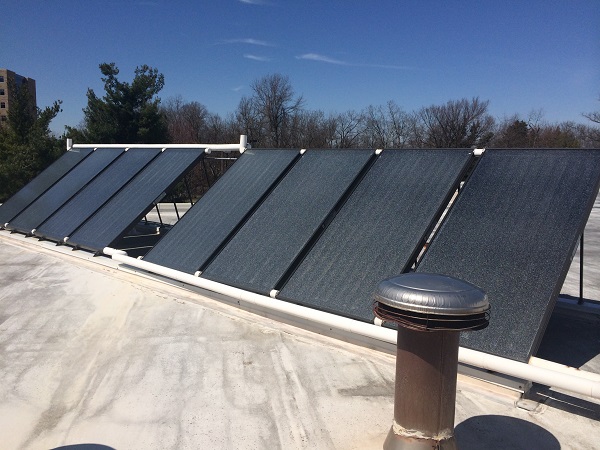 Unlike more commonly recognized solar photovoltaic systems, a solar thermal array does not convert the sun’s rays into electrical energy, but rather uses the gathered heat directly as thermal energy. This particular solar-thermal array harnesses solar energy to pre-heat domestic hot water for the facility. Most campus facilities get their water heating from the campus district steam heating system, but Regulatory Services is outside of the steam network and therefore was a viable candidate for solar-thermal heating. This system was installed in 2011 as part of a campus-wide performance contract.

The array consists of eight solar collector panels, a 400 gallon internal storage tank with heat exchanger, and associated pumps, sensors, and piping necessary for operation. The Alternate Energy Technology AE-32 solar collectors are 4’ by 8’ each, contain a series of fins and tubes for fluid circulation, and have alloy coatings to maximize heat transfer, allowing them to be useful down to near-freezing conditions. The collectors are oriented such that all of the glycol-based working fluid will passively drain back to the storage tank below if the circulation pumps are turned off, such as overnight or in frigid temperatures. The panels are visible from the ground on the southern end of the facility.

The UK Central Hall Geothermal well field consists of 108 – 500’deep wells, spaced on a 20’x20’ grid.  The wellfield is buried below the front lawn of the W.T. Young Library, directly next to Parking Structure #2. The well field provides heat rejection (summer) and heat gain (winter) to the water source heat pump loops in both Donovan and Johnson Hall, eliminating the need for both cooling towers and boilers.  The combined loop enters the basement of the South building, where it is pumped to the heat pump loops in each building.  There are a total of 357 water-source heat pumps connected to the loop, with a combined connected load of 317.25 tons or about 3,807,000 BTU.  The geothermal system saves nearly 40% of total building energy compared to same building designed with a standard minimally code compliant mechanical system. This project was completed by UK’s partner Education Realty Trust (EdR) in 2013 as part of the first phase of the campus-wide housing renaissance.